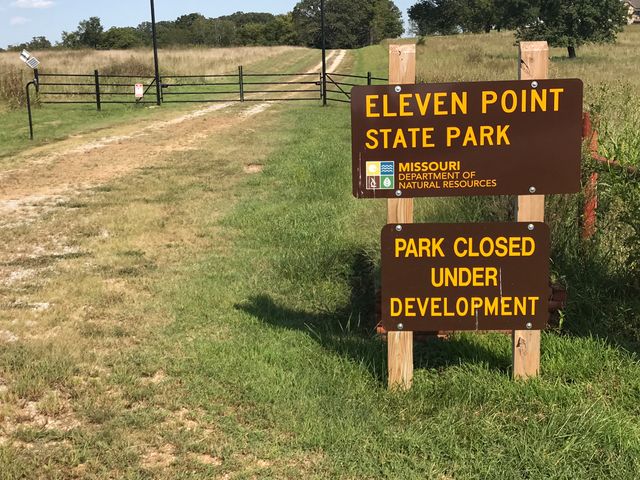 OREGON COUNTY - Brian Sloss has owned and operated Eleven Point Canoe Rental for the last 14 years in Oregon County, the poorest in Missouri in terms of average income.

He's been hoping for a boost in income from a state park that was supposed to open just down the road.

The Eleven Point State Park was one of seven new state parks announced last year by then-Gov. Jay Nixon. Eleven Point is now one of four of those parks that sit idle.

Sloss says Nixon's action would have protected a key portion of the river he gives tours on, the only designated wild and scenic river in the state.

There are many canoe outfitters along Eleven Point River in Oregon County that would likely see added business if the park was open.

Sloss said the park would "bring more tourists to our area and give us some economic growth."

"We need a boost in this area and I think a state park would be a good step in that direction,” he said.

Ben Ellis, the newly-appointed director of Missouri State Parks, said the parks were created without a way to fund staff and make safety and access improvements.

"So we are looking at all options for those four areas and how best to serve Missourians," he said. "We're putting together a number of options to look at and to determine what's in the best interest of the state and the citizens."

John Hickey, the Missouri Chapter Sierra Club director, said a number of factors show why the state needs to get the parks open.

In 2016, Missouri State Parks set a new attendance record, topping 20 million visitors for the first time. Missouri voters also overwhelming passed the one-tenth sales tax of which half of the funding goes to state parks and the other half to soil conservation.

The vote passed in all 114 counties with a total of 80 percent in favor. In the counties where the four closed parks are located, the sales tax passed by a landslide.

Hickey said the population in Missouri is going up every year, which means more state parks are necessary.

Like Sloss, Hickey noted the economic opportunities it would mean for businesses in these counties.

But Ellis said too much maintenance and repair is needed at previously existing parks around the state for others to be developed.

"The question is where does that funding come from to build trails and develop a park?" Ellis said. "It is not in the budget and our focus is on maintenance and repair of the 91 state parks and state historic sites that we have now and to get them to a level that meets the public’s interest."

State Rep. Randy Pietzman, R-Troy, proposed a failed bill last year to place a moratorium on state park growth while so many parks need maintenance around the state.

Pietzman grew up going to Cuivre River State Park in Troy and said that the facilities have been deteriorating in recent years.

“My intention wasn’t to prevent them from expanding, it was just a matter of taking care of what they have because I think the taxpayers deserve that,” Pietzman said. “They don’t have the money to maintain what they have.”

St. Louis Public Radio reported in August that mining companies could have significant interest in the land where the closed parks are located, especially Eleven Point State Park. It was purchased with almost $11 million from settlements with lead mining companies for environmental damages.

Hickey said The Doe Run Company wanted to drill in the Irish Wilderness federal wilderness area in the late 1980s, but the Sierra Club beat back that effort.

He said the notion that lead mining companies might be interested in prospecting is not just theoretical, but historical. For instance Doe Run is still doing a lot of lead mining in southeast Missouri.

"It would be particularly ironic if these lands that were bought with penalties paid by lead mining companies for their sloppy practices would then be turned around and turned over to the lead companies to destroy more land," Hickey said.

Ellis said the Department of Natural Resources and Missouri State Parks have not heard about any inquiries from mining companies.

"We have not had one response along that line," Ellis said. "I have never been in contact [with mining companies] about that and we checked with our division of geology and they don’t know about that, so I don’t know where that is coming from but we sure have not heard it."

Pietzman said he hasn’t heard anything about mining interests, but is supportive of the state selling the land.

“At this point, I don’t know what other option they have without going to the taxpayer to give them more support,” he said.

Sloss said that we would be particularly upset if the land that was designated for a park ended up getting sold to a mining company.

“I would hate to see them mining that close to the river. The pollution that could come from that would be horrible,” Sloss said. “I could see it happening, but I haven’t heard anything.”

The four parks, for now, are vacant.

“It’s just sitting there, not being used for anything and to me that’s a shame to spend all that money on the property and not go ahead with the investment in the area and to give us the benefit of it.”

Ellis said the Department of Natural Resources and Missouri State Parks are planning to hold meetings in those areas to discuss possibilities.

"We want to go and have some public meetings in the areas to hear from local landowners and businesses around the four park areas as to their thoughts, I don’t believe that’s been done to this point," Ellis said. "We want to engage with the legislature, especially the legislators in those areas."

Ellis said a decision on the land is far off, but no matter what the state decides to do with the land, whether to sell or keep it for parks, the state legislature will be involved.

The future of the four closed state parks is unclear. Ellis said it’s not unusual for a state to buy park land and wait to develop it.

Sloss said he hopes the state will follow through with its investment in his area.

“My fear is that they’ll just let it sit and eventually try to sell it later when people don’t seem to know or seem to remember that we own the land,” Sloss said.

With the growing population, the record number of visitors in 2016 and the 80 percent yes vote on the parks and soils tax, Hickey said the state needs to prioritize state parks.

“Missourians are voting with their feet and going to the state parks in bigger and bigger numbers,” Hickey said. “We need a state park system that meets those priorities of our state’s residents to visit and enjoy the parks."