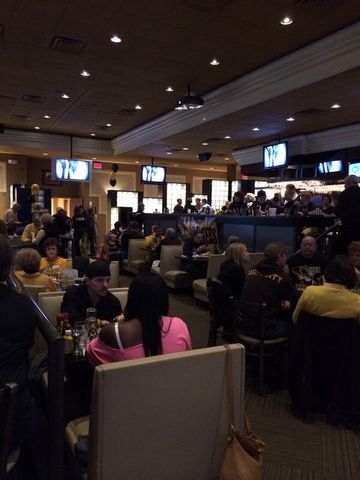 By the time the game started, more than 80 people had arrived at Sports Zone and only a few tables were open.

Sports Zone hosted a watch party sponsored by the Boone County Chapter of the Mizzou Alumni Association and the Tiger Quarterback Club. The sponsors have games running throughout the night, and the bar is offering beer specials as well.

"We've got a lot of people out to watch the game," Buffalo Wild Wings manager Joe Tipton said.

1839 Taphouse also said it had a crowd starting a little after 4 p.m.

The game brought people into bars when business has been either slow or unpredictable in the past few weeks.

John Butner, a waiter at Sports Zone, said football season is the busiest time for the bar and restaurant.

"Typically on game nights we get pretty busy in here," Butner said. "Nights that there isn't a game it kind of just depends what's going on. Around the holidays it's been kind of slow, without there being any football games, and people traveling."