Gas prices continue to rise, Missouri better off than most states 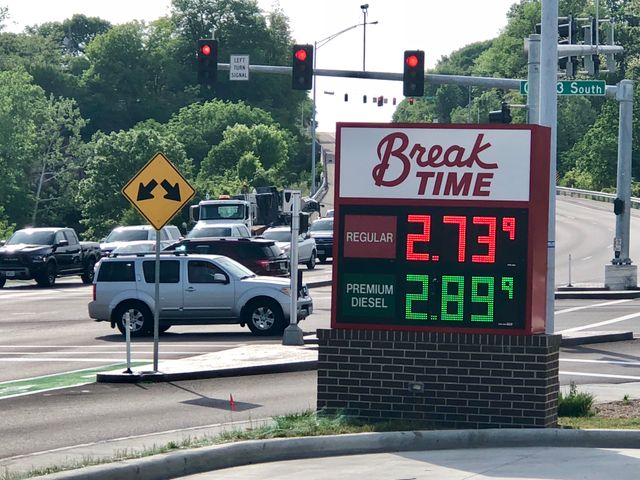 COLUMBIA - A trip to the gas station may leave drivers' wallets emptier than usual as Missouri prices went up 9.1 cents per gallon in the last week.

According to AAA, Wednesday's current average for gas prices in Columbia is $2.795 per gallon, compared with neighboring Jefferson City at $2.663 per gallon and statewide at $2.671. That's upward of 50 cents higher than last year's rates.

KOMU 8 News spoke with several drivers at gas stations in Columbia. A handful of drivers noticed the difference, but a few didn't notice the price change at all.

"It isn't impacting me yet, but it probably will," Joel Sartwell said. "I'll start biking to work a little more. I just like to save that money, it can add up."

Dan McTeague, senior petroleum analyst at GasBuddy.com, said drivers can expect more of an increase within the next week.

"We haven't quite hit the magical summertime period where summer demand driving starts to kick in," McTeague said. "That comes in officially with the start of Memorial Day Weekend and I think that's really a sign of where we expect prices to increase another 10 cents a gallon."

Nationally, the average for gasoline prices went up by 5.7 cents per gallon in the past week, putting prices 53.8 cents higher than last year's prices. On Wednesday, the national average price was at $2.891 per gallon, and McTeague said he expects it to rise to $3 soon, which hasn't happened in 2014.

While rising prices are a national trend, McTeague said comparatively, Missouri is in good shape. He doesn't expect Missouri to hit the $3 mark.

"You [Missouri] have a little bit of a sweet spot and you're among the lowest," McTeague said. "If you had to compare the lowest prices of any state, you guys are in the bottom 5 of the 50, and it's good to be in the bottom when it comes to prices."

McTeague has worked in the petroleum industry for three decades, and he said back in January he predicted 2018 would be the most expensive year for gas since 2014.

He attributes this increase to multiple factors like international tensions with Iran and supply and demand, but McTeague said the biggest factor is oil. This time last year, a barrel of crude oil cost $47, according to the U.S. Energy Information Administration. As of this week, a barrel costs $71.