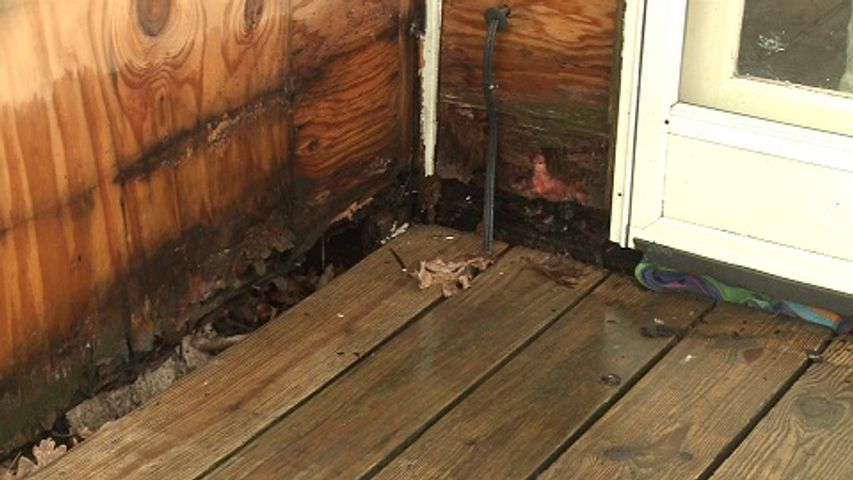 GASCONADE COUNTY - A Bay woman says a local contractor failed to finish a renovation job at her home, leaving the work open to the elements and costing her hundreds in additional damage. Rita Overturf said after realizing the lap siding on her home held in too much moisture causing the substrate to rot, it needed to be replaced or the front end of her home would collapse within six to eight months.

In late October, Overturf said she hired Thurmond Brothers Construction to do the the work. The Sullivan-based company is owned by brothers Steve and Mark Thurmond, who are also the duo behind Sullivan Insulation. Overturf said she initially had a positive experience with the company as Mark Thurmond handled all monetary negotiations in an efficient, professional manner. But Overturf said soon after signing a contract and paying $9,493 up front, she learned Mark Thurmond was deployed to Afghanistan and Steve Thurmond would be taking over the project. Overturf said this is when the problems began.

"He (Steve) told me he had a couple of jobs to finish first, so he wanted to wait to start mine so he could finish it all at one time," Overturf said. "The first time he came, towards the end of November, he took down my guttering and some of the siding and said he would be back on Monday. He never came back."

Overturf said Thurmond came later that week, claiming the man he hired to help with the job had quit. She said Thurmond proceeded to make a few more sporadic visits to the home in a two-month period, cutting a hole around a tree in her deck without framing it back in, taking the threshold off her crawl space door, and leaving the deck on a jack. Overturf said Thurmond's last visit was right before Christmas and he left saying he would return on the "next good weather day." She said she has not heard from him since.

After no sign of Thurmond for almost a month, Overturf felt she had been ripped off.

"I panicked," Overturf said. "It's seven dollars short of $9,500. That's not easy to come up with...and actually I'm in a bind now. I don't know how I'm going to get my house fixed. I almost wish if he was going to steal from me he would've just taken the check, and instead he took the check and did a lot of damage to my house."

That damage has left a six-inch gap between her deck and back door, allowing cold air and water to seep through into the home, causing her kitchen tile to come loose. Overturf has shoved blankets and towels into the space as well as put up a tarp over the open threshold in an attempt to keep the moisture out. She said her heating bill increased more than $200 in the last month. Thurmond also left the torn down guttering and other signs of his unfinished business on full display throughout her lawn.

Overturf said she has been relentless in her efforts to contact Thurmond.

"I mean I went ballistic...like 50 calls to his business phone," Overturf said. "It just rings, and rings, I used to get his voicemail and now I can't get the answering machine or anything. I call every other day and once I realized he stole my money I called continuously and I couldn't reach him from my cell phone or my home phone."

Steve Thurmond did return KOMU 8's calls and said Overturf has not called the business number since his last visit to the home.

"She has not called my business phone in more than three weeks and last time I went out and talked to her I told her I can't come back until it's above 40 degrees so I can paint," Thurmond said.

Last week the temperature was above 40 degrees at least three days. Overturf said she saw no sign of Thurmond.

"We've had many good days," Overturf said. "He could've done woodwork, and carpentry work, painting is the minor stuff, I could do that myself. I need the carpentry work done. There's some very serious work that needs to be done here and it's carpentry work. If he can't do it, he can't just charge me for slapping on some paint. My house will still fall in the front yard."

Thurmond said he has had other engagements.

"Yes we've had some good days off and on but the good days I''ve had I've always been on another job or had to finish up something else," Thurmond said.

Thurmond claims the job is 50 percent or more done and he has full plans to finish it.

"I'm not going to ship up and not finish the job...one thing, I got tools up there," Thurmond said. "I wasn't going to pack up and leave the job, if I wasn't going to be back up there I wouldn't leave tools sitting around ..I'm not planning on not doing the job I just need a couple of good days to get up there and get stuff done."

If this doesn't happen, Overturf feels she is all out of options.

Overturf regrets not being more detailed when making her decision to hire Thurmond.

Mike Odneal, the branch manager for the Better Business Bureau of Mid-Missouri stresses the importance of details, urging consumers to do their research before choosing a company.

"There are a lot of resources out there for researching companies and we also ask people to talk in person and make sure they're visiting the sites and locations of people who have had construction done by this specific company," Odneal said. "You should also talk to references in detail about how the company performed in the past."

Odneal said contracts are also crucial to ensuring you don't get your money taken away. He recommends making your payments in increments.

"A good way to do it is if you pay a third up front based on a contract and agreement that you have," Odneal said. "Then once there's a certain milestone achieved you pay a little more. Then, don't pay the full amount until the job is completely finished to your satisfaction."

Odneal found one informational claim against the Thurmond Brothers in his system, dating back to 2005, but the system does not have details going that far back.

Overturf hopes others will learn from her situation.

"Be more thorough before you hire anybody," Overturf said. "Do better background checks and make sure they have done reputable work with other people and never pay upfront. That was so stupid of me to do."

As of Monday afternoon, Overturf said she had not heard from Thurmond.