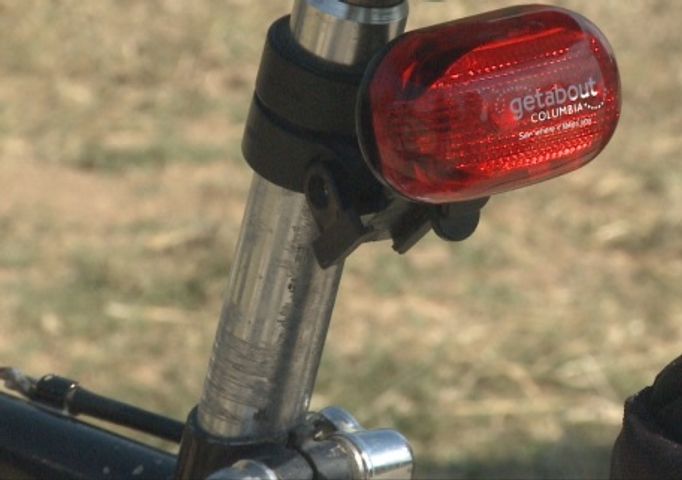 COLUMBIA - GetAbout Columbia donated 100 bicycle tail lights to the Roots N Blues N BBQ Festival. People who choose to bike to the event can pick up a free tail light at the festival while supplies last. The group also provided a few white front lights.

Janet Godon, the GetAbout Columbia coordinator, said the organization is encouraging people to walk or bike to the festival. Cyclists can park their bikes at the front of the venue, at no charge.

"If you take advantage of the free bike valet, you will be offered a bicycle tail light or a front light when you leave," Godon said.

Due to the increased traffic because of the festival on East Walnut Street, Godon and others who are working the event are encouraging pedestrians and cyclists to use the North Perimeter Trail path and to stay off of the main road, which will be used by shuttles and other cars.

"We just want to alleviate the traffic on East Walnut and we just don't want that interaction between pedestrians and bikers on a dark road," Godon said.

She also said it is very easy for people to make their own front lights for the bicycles, if they do not receive one from the festival.

"It's simple to make one. All you need is a little flash light and duct tape or a couple of zip ties and wrap that around your handle bars," Godon said.

Brian Kukla, who works at the CycleXTreme, is planning on biking to the festival.

"It's more fun and you get better parking, " Kukla said. "But after the event, we had to walk our bikes pretty far away from Stephens Lake because the crowd was so big."

Even though he uses a tail light, front light and reflective gear, Kukla said he knows some people will not have proper lights on their bikes, so the free tail lights will be very helpful.

He also said the trail path was not as lit up and he had some trouble seeing pedestrians, especially near the "dark" spots on the trail.

The city installed new energy efficient street lights partially around the Stephens Perimeter Trail on the North side. The lights have been part of a master plan because the city saw a need for new lights on the path. The new trail lights are eco-friendly and motion-sensored. If a cyclist or a pedestrian is underneath it, the light uses 100 percent of its energy. Other times when there is no traffic, the lights only use about 40 percent.

The total cost for the new lights is about $45,000, after the city completes the installation around the trail. The money came from the 2010 park sales tax.