Girl with juvenile arthritis creates change for others like her 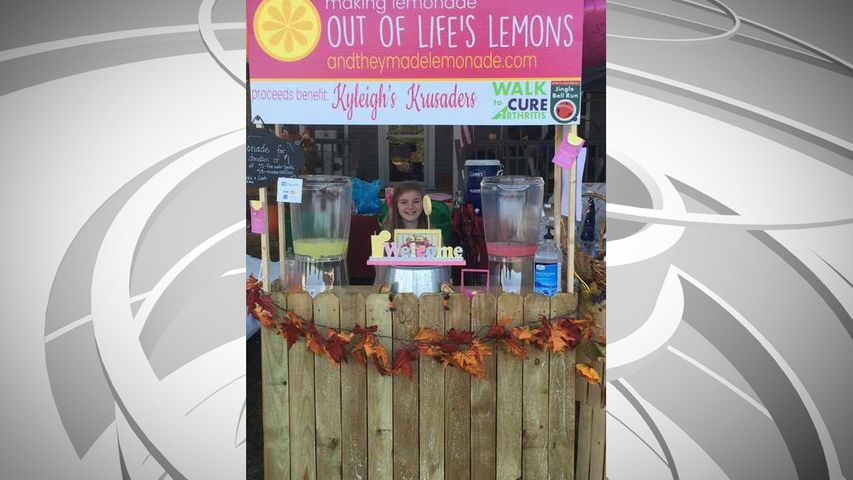 COLUMBIA- A Columbia girl with juvenile arthritis says her motivation and determination outpowers her pain every day.

“It affects my knees, ankles, fingers and sometimes my elbows,” she said.

Kyleigh is a young advocate fighting to help herself, and other children, with the disease. She has been a junior ambassador at the U.S. Capitol for five years, and has asked lawmakers to join her fight to bring awareness to this medical issue.

“It’s really empowering to know that you can help thousands of kids by telling your story to the senators and representatives and ,like, it feels really good to like help kids like that,” she said.

Kyleigh has also been lobbying for the Ensuring Children's Access to Specialty Care Act of 2017, before the U.S. Senate.

“It helps get more pediatric rheumatologists because we have a shortage. They, like, group together in different states. There aren’t very many for kids to go to," Kyleigh said.

Pediatric rheumatologists are physicians that specialize in helping children with rheumatic diseases.

“There are 300,000 children with arthritis and there’s less than 350 pediatric rheumatologists in the U.S.,” Kyleigh said.

Her mother, Janet O'Brien, said before Kyleigh was diagnosed, she was sick for about nine months.

“Just weird symptoms like a headache or tummy ache and like low-grade fevers and we’d been taking her back and forth to doctors trying to figure out what was going,” O'Brien said.

She said doctors couldn’t come up with a reason why Kyleigh was sick.

“We kind of thought that doesn’t sound like its likely, but we just went along with it and gave her some ibuprofen for about 10 days and she felt better,” she said.

However, six weeks later, Kyleigh’s knee pain returned when she was at school.

From that point, the family took her to urgent care for an X-ray. The doctors there told the family that Kyleigh’s symptoms resembled juvenile arthritis.

After her diagnoses the family searched for other families with children who had the disease. The family found out about the juvenile arthritis national convention, and the Walk to Cure Arthritis.

Kyleigh was couldn't manage the walk on her own, but, with the help of her siblings, she was able to finish it.

“Her brothers had her on their shoulders and carried her through the walk,” O'Brien said.

In addition to her lobbying, Kyleigh has a Facebook page - Kyleigh's Krusaders -  where people can learn about juvenile arthritis. She also has a website called “Making Lemonade out of Life's Lemons," where she highlights children like her who refuse to let their medical issues stop them from anything.

“Other kids appreciate the page so other people know what they’re going through,” Kyleigh said.

She said helping others is a huge passion for her, and she doesn’t intend to stop.

“Advocating is just, like, you help so many kids and you don’t want to stop because they need help. I just wanna help them,” Kyleigh said.

O'Brien said there is a lot of misinformation about children with arthritis.

“The biggest thing that we try to push is awareness that people are aware that kids gets arthritis too. It’s not your grandma’s arthritis that people think about. It's not like osteoarthritis. It has to be treated differently. It’s the immune system attacking the joints of their bodies,” O'Brien said.

Kyleigh said, in the future, she hopes she can be a part of the process to end this problem for children.

“Hopefully there will be some kind of cure, better medicine to help kids, like, stay better longer and, hopefully, I’ll be able to help them and help all the other kids with juvenile arthritis,” she said.