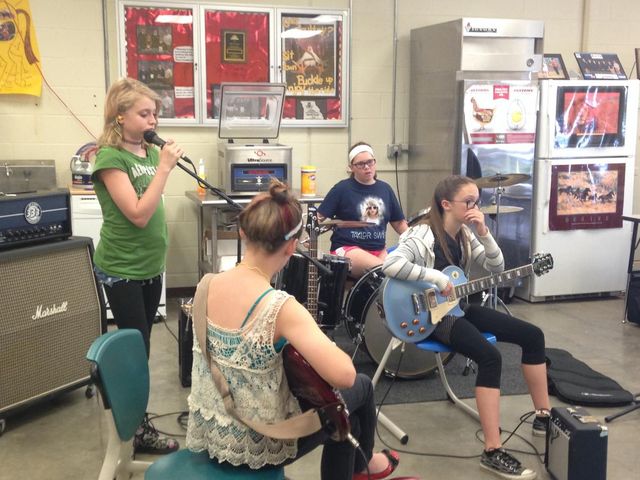 COLUMBIA - Rock music blares from the room while young female musicians use instruments as a way to symbolize female empowerment through Como Girls Rock!. Posters that say "You can do it" and other encouraging quotes hang along the wall in the room at the Columbia Area Career Center where the music camp takes place.

Como Girls Rock! include workshops called "Girls to the Front" and "Sisterhood is Powerful." The workshop scheduled Thursday is "Rebel Girl" which is about self-defense.

The different workshops have the campers interact with each other as team building exercises.

The co-founder of the camp, Luci Cook, said the main goal is for young women to learn about their community and how women can help each other out as opposed to bringing one another down.

"The idea is to empower girls and young women and to give them a space to feel safe and supported and listened to," Cook said. "The music just kind of the medium that we use to do that."

The campers are formed into bands and throughout this week they wrote a song, practiced playing a new instrument and worked at building self-esteem and confidence through workshops.

Amanda Rainey, co-founder, said she and the other co-founders noticed the girl rock camp movement around the world and wanted to bring one to the area.

The self-defense component is new this year.

The Center for Disease Control and Prevention said in the U.S. one in five women are sexually assaulted, and most before the age of 25.

Cook said she believes self-defense is an important workshop to have for the campers.

"As a young girl growing up, you're not encouraged to use your physical body," Cook said. "They can learn self-defense to help them feel more connected to their bodies. It's not necessarily just to fight off attacks, but it's also to just remind them that their bodies are strong and that they can say 'no'."

"In the music community, women are often under represented or misrepresented," Cook said. "We like to show girls that if they just look around them there's a whole community of women who enjoy music and feel powered and want to vocally influence the next generation to feel that way too."

The camp only focuses on young women and their roles in the community. Only female bands perform concerts at lunchtime for the campers, only female instructors teach the workshops and only female musicians attend the camp.

The six different bands will perform a showcase Saturday at the Blue Note and doors open at 2 p.m.

Columbia businesses don't have to refuse service to unmasked customers
COLUMBIA—About 20 people filed complaints about other individuals or businesses not following the mask ordinance this weekend, according to the... More >>
59 minutes ago Monday, July 13 2020 Jul 13, 2020 Monday, July 13, 2020 7:19:00 PM CDT July 13, 2020 in News
Share:
Email
Facebook
Twitter