Glass, aluminum and paper: What happens to all that recycled material? 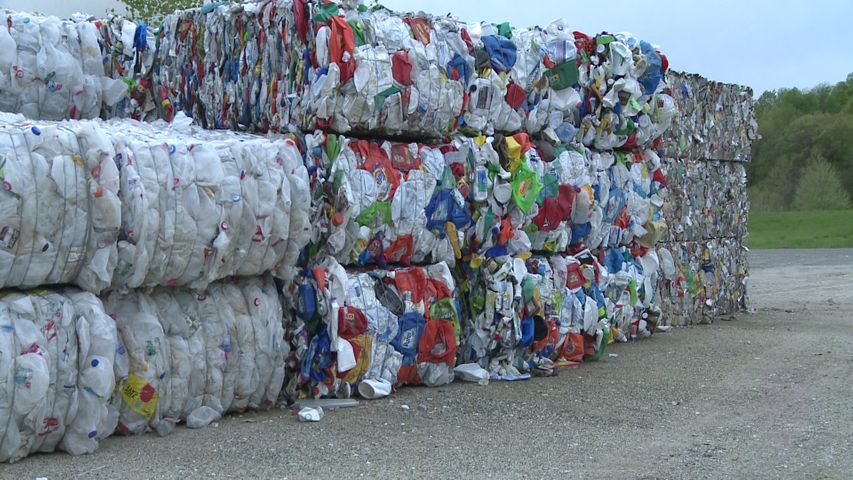 COLUMBIA - Many people may bag up their recycling, leave it on the curb and then promptly forget about it. But there's a lot that happens with all that plastic, glass and cardboard before it's done.

The Columbia recycling facility gets a steady flow of recycled materials, with a slight increase right before the holiday, said Waste Minimization Coordinator Ben Kreitner.

Many cities only have one stream because it is considered to be more efficient and automated. It’s possible that the new facility that Columbia Waste Management hopes to build will have the single stream.

The facility opened in 2004 off of Brown School Road on the north side of Columbia. The road leading to the building is made of recycled glass asphalt, and crosses Hinkson creek on a small bridge.

One thing the center gets a lot of are those iconic blue recycling bags. But, ironically, they are not recyclable. They’re made of plastic film.

“We tell people that if you pick up a piece of plastic and it loses its shape, it’s probably plastic film,” Kreitner said.

Plastic film and Styrofoam #6 are the only types of plastic that the Columbia facility is unable to recycle.

As the materials move up the dual streams, 3 to 5 workers will begin sorting the material. They wear Teflon gloves, sleeves and closed-toed shoes to protect themselves from injury. Needles, broken glass and sharp edges are daily work hazards, and each worker must be careful.

On the containers side, workers sort plastic into plastics 1, plastics 2 and plastics 3-7.

“We started accepting 3 through 7 plastic about two years ago,” Kreitner said, “but it’s not as marketable or profitable as other materials.”

Trash is thrown away in large plastic bins next to each worker. At the end of the conveyor belt, a magnet pulls the aluminum off the line to be sorted into its own pile. The magnet is 96 to 98 percent effective, depending on the day.

On the other side, workers sort the various fiber products into piles of different types of paper and cardboard. Cardboard is the most recycled material in Columbia, but isn’t the most profitable. Aluminum is three times as valuable as cardboard recycling because it is melted down and none goes to waste.

After all the materials have been sorted, skid loaders scoop the piles onto a conveyor that runs through the baler. Each bale weighs around 1400 pounds, depending on the material. Cardboard and plastic bales are moved to outdoor tents, while paper and aluminum bales stay inside.

The facility sells bales using a bidding system. Companies, mostly from Kansas City and St. Louis, agree to buy all the bales of a certain material for about a year.

The city currently doesn’t have a buyer for recycled glass, which is harder to produce because it must be 99.8 percent pure glass. Right now, the city uses some of the glass to cover the landfill. The landfill must be covered daily by soil, or by an alternative daily cover, like glass.

“While the goal of the recycling facility is to break even every year, the real savings comes from keeping material out of the landfill,” Kreitner said.