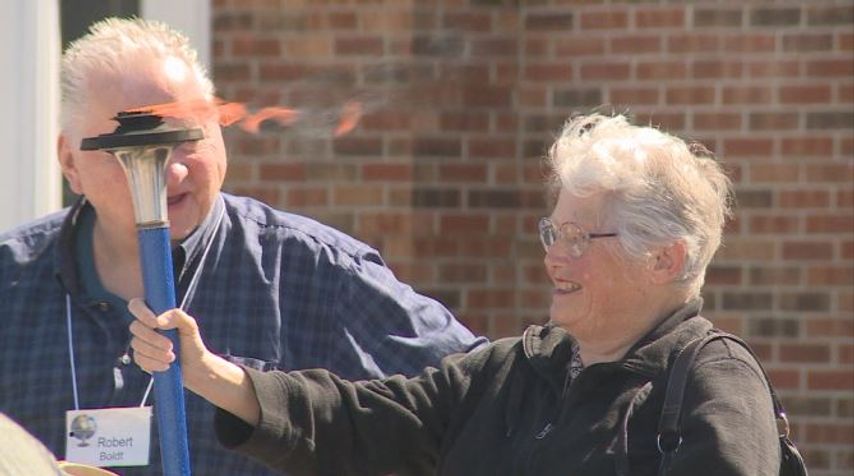 JEFFERSON CITY – The Sri Chinmoy Oneness-Home Peace Run made its way through mid-Missouri on Sunday, going through Jefferson City as it heads to Kansas City.

Arpon DeAngelo, a captain for the North America team, has been of runners and he says the team’s message of spreading peace is about inner reflection.

“Spread a message that peace begins with me. We symbolically pass the torch to represent our good qualities we want to pass to others such as peace, understanding, friendship and cooperation” DeAngelo said.

This year’s peace run, which started on April 17 in New York City will, will cover more than 10,000 miles in a four-month period. The running team features 12 runners coming from eight different countries around the world including France, Mongolia, and Kazakhstan.

“It’s a great honor to represent my country on this international team and this is a great way to travel and see a new country.” Said Akbota Jumabayeva, a team runner originally from Kazakhstan.

The Peace Run originated in 1987 by Sri Chinmoy, a peace ambassador who lived in New York. According to DeAngelo, Chinmoy created the run because he wanted people to bring peace into their families and communities.  The run has now spread beyond the United States, as the team will also travel to Canada and Mexico during this year’s run.

“For us, this is a way to offer something back to the community in an athletic and inspirational way,” DeAngelo said.

The run now heads to Kansas City where it will then turn south for Oklahoma and New Mexico before heading to Mexico.