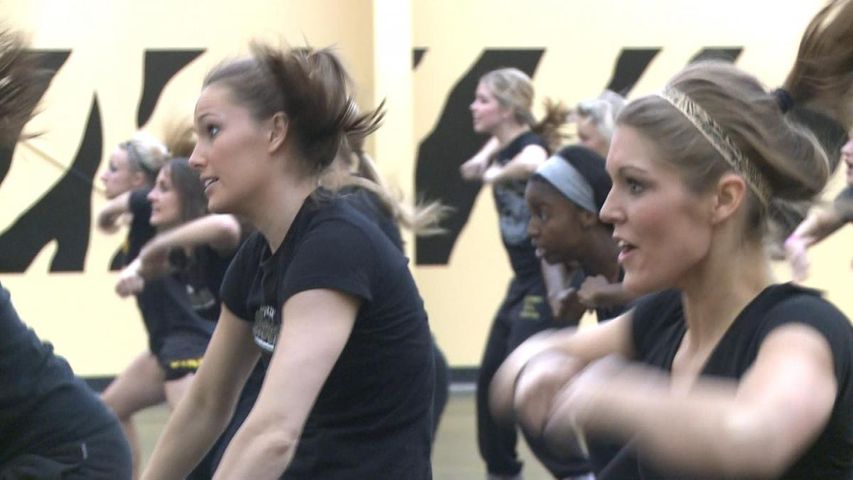 COLUMBIA- It comes as no surprise that the Golden Girls can dance, but there's certainly some surprises on this team.

"Some people may think that we're really oh, ditsy, a little airheaded, and like oh we're stuck up," said Sophomore Rayci Lee. "Definitely not at all. All of us are very well rounded. I mean you talk to any of us we can hold a conversation."

"Oh gosh how much time do you have? You know I get asked every year do you have to be blond? How tall do you have to be? Do you have to have a height limit? There is just kind of an x-factor that we look for when we choose a golden girl and it's probably not what a lot of people think," said Golden Girls Coach Shannon Fry.

But Missouri's Golden Girls are a serious group of girls also competing in a serious sport.

"We have some of the same bruises, the same injuries that most athletes would because we're just dropping to the ground, no hands, doing lifts with each other so we have to have a very athletic build as well," said Trader.

"It's part of my routine. It's school, golden girls, and school again," said Lee.

And for many of the girls on the team, this has been a dream come true.

"I remember going to my first basketball game at Hearnes Arena, sitting up in the nose bleed seats," said Senior Leslie Zeliff. "It was quite an experience and I always looked down and watched the Golden Girls and kind of looked up to them."

"It's just the tradition of it. I grew up here and have lived and breathed Mizzou since I was a little girl and to see the little girls look up to like I once did it's so much more than just dance," said Trader.

And it's a tradition that hasn't died for one former Golden Girl.

"Literally I came back to judge and came to the spring football game and saw so many people that were here whenever I was in school and it was just a really warm feeling so I literally came home that night and asked my husband what do you think about us moving back to Columbia," said Fry.

And Coach Fry has come back to guide the Golden Girls to a lot of sucess...a 2nd place finish for hip hop and 4th in jazz in the 2012 USA National Competition.

This year they're in the higher NDA division, but it's a team that certainly isn't lacking confidence.

"I think [we can win]. We have the dedication and the hard work. We really want it after last year," said Zeliff.

A team looking to dance its way to the top.

Nationals are this Thursday with finals set for Friday.