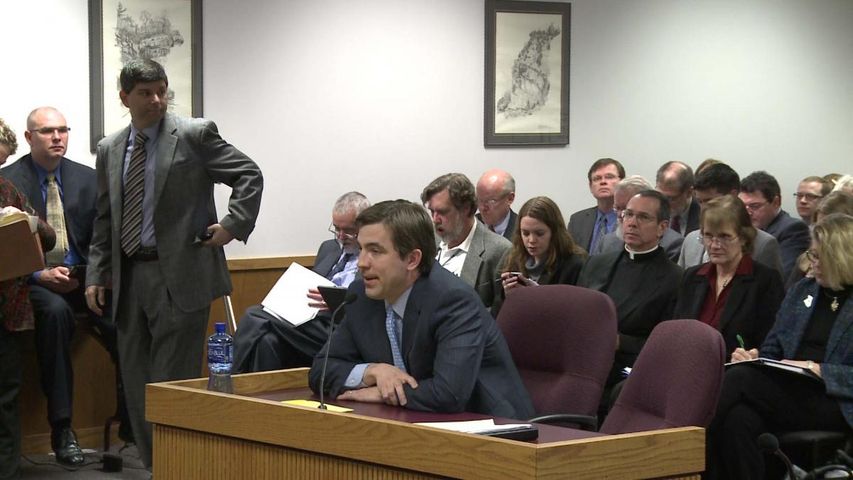 The proposal comes weeks after Republican-led committees in both chambers voted down Democratic proposals to expand the state's Medicaid program to anyone up to 138 percent of the federal poverty level as required by the new federal healthcare law. The bill, sponsored by Rep. Jay Barnes, R-Jefferson City, makes several major changes to Missouri's Medicaid program, called MOHealthNet. It eliminates health insurance for children unless their parents do not have access to health insurance through either an employer or a health insurance exchange. It also eliminates coverage for women who have been diagnosed with breast or cervical cancer. Neither of these measures would take effect until six months after tax credits became available to allow such people to purchase insurance through a health insurance exchange. Barnes said his plan would reduce overall eligibility but increase the program's availability to those who could still take part.

Under the bill, Medicaid recipients would be presented with a list of plans to enroll in. If they choose the one with the lowest cost to taxpayers, the MOHealthNet Division would pay them a portion of the cost savings. Participants would have a choice among a high-deductible health plan, a cost-sharing co-payment plan or an incentive plan for people with chronic conditions. That plan would provide incentives for people to meet certain wellness goals or abstain from certain activities such as smoking.

Any plan offered by MOHealthNet would have to cover, at a minimum:

Mental health disorders, including those arising from substance abuse

In addition, Barnes' bill would create incentives to build urgent care clinics in or near emergency rooms.

Missouri Primary Care Association Director Joe Pierle told the House Government Accountability and Oversight Committee the bill would enhance the state's economy and improve the health of its citizens. He said the healthcare industry is operating under a cloud of uncertainty as to the future of the state's healthcare policy, which he said leads to stagnation and inefficiency. Pemiscot Memorial Hospital CEO Kerry Noble said the bill provides for extensive reform and will sustain the system for years to come. He said his hospital dramatically reduced emergency room use after it opened an urgent care clinic.

Barnes' proposal depends on the U.S. Department of Health and Human Services to grant three different waivers. One would be needed to expand Missouri's managed-care corridor to the entire state, another would be needed to permit price competition, and a third would be needed to extend benefits to 100 percent of the federal poverty level rather than 138 percent. St. Louis University law professor Sidney Watson said the Secretary of Health and Human Services cannot waive the 138 percent requirement. The federal poverty level is currently $23,550 a year for a family of four.

Several people said they would rather see Barnes' bill cover anyone up to 138 percent of the federal poverty level. Rep. Gina Mitten, D-St. Louis, told KOMU 8 News Barnes' bill is an inadequate substitute for a Democratic proposal that would have expanded Medicaid up to that level. Misty Snodgrass, the state director of Legislative and Government Relations for the American Cancer Society, said expanding eligibility to 138 percent of the federal poverty level is the most affordable option. She said her organization would not support a bill that would eliminate coverage for any woman battling breast or cervical cancer.

By far the most emotional testimony came from John O'Rear, a Jefferson City resident whose son dropped out of college and became addicted to medications after developing bipolar disorder. O'Rear said the country's existing healthcare system prevented his son from getting the treatment he needed and accused lawmakers of forgetting the human cost.

"For God's sake, just do the right thing," he said.

The committee plans to vote on the bill next week.