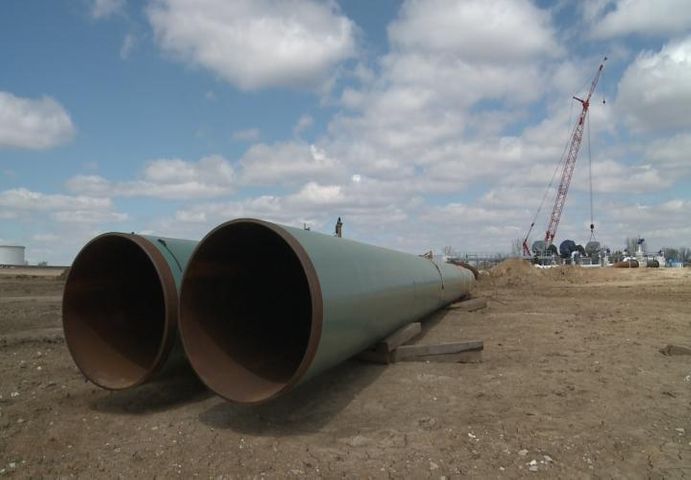 While on the tour, the governor visited the new facility and received a briefing on the progress of the project. Canadian energy transportation company Enbridge is constructing the 600-mile oil pipeline from Pontiac, Illinois to Cushing, Oklahoma, crossing 11 counties in Missouri. Jerrid Anderson, the Enbridge project director of the Flanagan South pipeline, said the project overall is approximately 95 percent complete.

After the tour, Nixon greeted the construction team, talked to the workers and took pictures.

"I am proud of these workers. They helped build the state pipeline right across Missouri, help make us more energy independent and help these rural economies," Nixon said.

The project provided an estimated 1800 jobs in Missouri during peak construction and is expected to generate an additional $8 to $9 million annually in state and local tax revenue. Governor Nixon said the project will help Missouri and North America to become more energy independent.

"To get these oil sands down to America, down to our ports so that they can be refined there, help give us energy from a partner like Canada that has been a friend for years, much better than the Middle East when it comes to oil," said Nixon.

But not everyone welcomes the initiative. Some environmental groups oppose the pipeline construction due to the damages construction and the oil inside the pipeline could pose. Heather Navarro, executive director of the Missouri Coalition for the Environment, said a potential oil spill could take years to clean up, refering to an 2010 Enbridge oil spill in Michigan which dumped more than one million gallons of crude oil into the Talmadge Creek near the Kalamazoo River. Navarro said the oil the pipeline contains is not ordinary crude oil. It contains an ingredient called "bitumen" which could seriously harm the environment, she added.

But Nixon said he reviewed the safety procedures and challenges at the new site and he is confident workers and the state will be able to deal with the challenges.

"We had out environmental folks down here years ago to make sure these lines are going to be safe and if something does happen that we are in a situation to minimize it, I think that our state of emergency respond in a strong, permanent, really stand out as a model what can help guarantee the safety," said Nixon.

Nixon recently got back from a trade mission in Canada where Missouri signed a first-ever trade agreement with the province of Ontario. Nixon said he hopes the success of the Flanagan South pipeline project will bring more investment and job opportunities to Missouri.

The project is expected to be finished this summer.