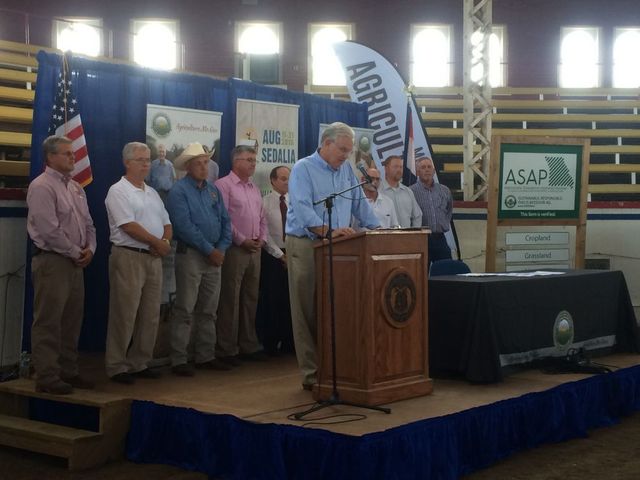 Nixon emphasized the importance of the work the legislators did over the past couple years to get these bills approved and ready for signing. He noted the bipartisan work ethic that allowed the bills to take shape and ultimately reach his desk.

Gov. Nixon also stressed how vital agriculture is to the Missouri economy and believes these bills will bring growth to the prosperous field.

Missouri Agriculture Director Richard Fordyce was happy with the signings. He was especially happy with Senate Bill 665. This bill re-authorizes the existing Qualified Beef Tax Credit until 2021. Fordyce wants the cattle grown in Missouri to stay and be sold here in the state as well.

"We are gonna actually incentivize folks to keep cattle in Missouri longer. We are the number three cattle state in the country, but by the time those cattle get to a finish way where we're ready to process them we have lost most of them," Fordyce said.

Senate Bill 657 will promote the installation of blended fuel pumps at more gas stations throughout the state to ensure gas stations offer ethanol based fuel.

Secretary of State Jason Kander proposed Senate Bill 664 which will allow for family farms to forgo extra paperwork each year if the farm's reported information has not changed throughout the year.