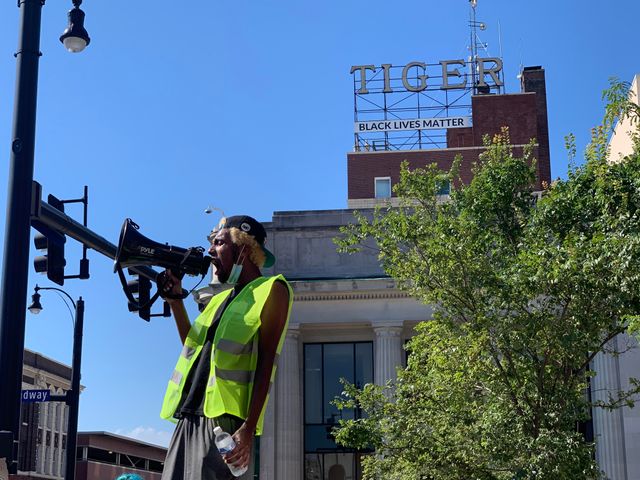 "That's a concern everywhere we go in the state," Parson said.

The meeting was closed to the public, but protestors were outside for when it finished.

Before that, protestors marched from Flat Branch Park to City Hall to continue the discussion surrounding police brutality.

"We've had plenty of people here who've spoke at Columbia City Council, and he's here in Columbia to help with Columbia violence, so I really hope he was taking those things into account, with what the public is actually saying," Kirubel Mesfin, an organizer for Thursday's protests, said.

When they arrived at the city council chambers, many of the protestors were displeased to see a large partition blocking the view through the glass doors at the entrance.

"To not even be able to view an event like this with the governor of my state, who as far as I know, has never been to this city council meetings, is outrageous and very sad, very sad," Alyce Turner, a protestor, said. "We don't want Governor Parson here if what it means is we don't have transparency in government."

Parson touched on the special session starting next week this morning as well. Only the media was allowed in. Protestors stayed outside the council chambers.

"Easiest thing would be to delay all of this until a later date, but the reality of it is, people are dying in the streets everyday in the state of Missouri," Parson said. "To delay this any longer is not practical to do that, that's why I'm thankful the legislatures are coming back to do this, the importance of it. All of these penalties will have an effect on violent criminals. and that's the whole target of this special session."

Columbia Police Chief Geoff Jones was at the meeting, and says he's grateful for Parson's help.

"To take action is exciting for me, it's encouraging to the officers, and it should be encouraging to our citizens, so Governor, thank you for that," Jones said.

The special session starts next week.