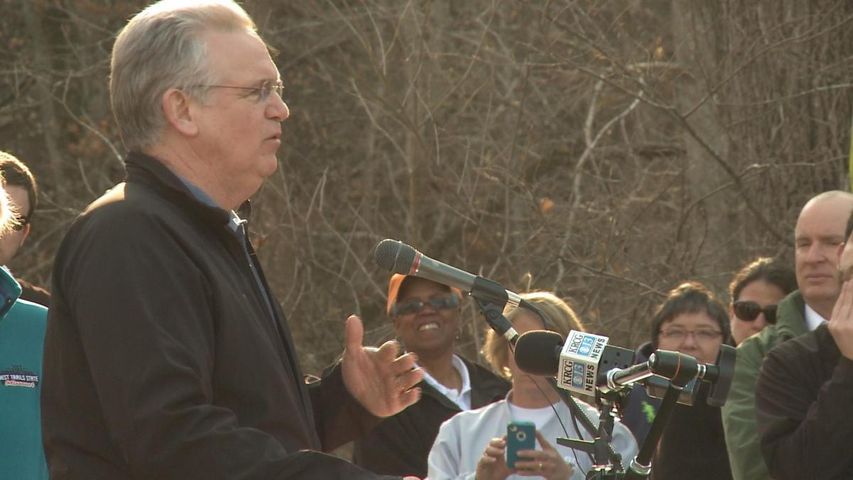 COLUMBIA - Governor Jay Nixon and First Lady Georganne Nixon launched the second edition of the 100 Missouri Miles Challenge in Rock Bridge Memorial State Park Wednesday. This challenge promotes outdoor physical activities for the beginning of spring and encourages Missourians to complete at least 100 miles a year. Nixon started the challenge by walking 1.3 miles with participants on the Devil's Icebox Trail.

Gov. Nixon created this program a year ago when Missouri obtained the title of Best Trails State in the nation. In 2013, Missourians who participated in the event covered more than 1 million miles, and Gov. Nixon hopes this year will have more participants and not only walking.

"Anyway that people can get out and go, and a lot of folks canoeing and kayaking also", Nixon said. "Some of those folks call it 'Blue miles', so we saw a lot of blue mile work last summer too."

"It's great to have the Special Olympics folks," Nixon said. "You know, there is a number of folks that have wheelchairs, and they've gone a hundred miles that way."

First Lady Georganne Nixon said she was excited to support a program promoting physical activity and the State Trails. She also said it was a good way to continue the efforts of First Lady Michelle Obama's program "Let's Move".

"This program dovetails beautifully with Michelle Obama's Let's Move program," Georganne Nixon said. "I think people accross have seen the value of this, but we really love this because it showcases Missouri's trails."

"People in Central Missouri are really fortunate to have Rock Bridge Memorial State Park in their backyard, because it has such a great diversity of hiking and biking opportunities in the park," Bryan said. "One day you can hike through a prairie in a grassland, the next day you can hike on top of a bluff overlooking Gaines Creek wild area. So there is a lot of great experiences you can have right here close to home at Rock Bridge."