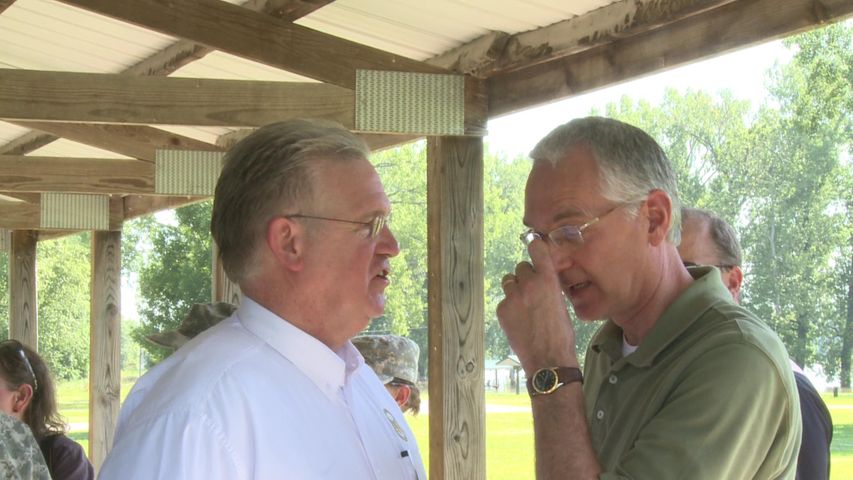 GLASGOW - Governor Jay Nixon traveled to Henrietta, Levasy, and Glasgow on Thursday with members of the Missouri National Guard including Maj. Gen. Stephen Danner. Nixon and Danner spoke about their plans for the Missouri River flooding in the areas.

In Glasgow Nixon assured residents and city officials that he would do everything in his power to protect as many buildings and as much farm land as possible. He said the river will continue to rise over the next few weeks or even months due to the amount of water being released from the Gavin's Point Dam in northeast Nebraska.

Glasgow's water pumping station, located just up river from the town, is currently inaccessible due to water. It has not failed yet, but if anything goes wrong crews will be unable to reach the facility. Nixon said water treatment facilities, like the one just north of Glasgow, will be a priority to protect from water. He said that clean, potable water is one of the most important things to maintain for Missourians.

Like many water treatment facilities, sewage facilities along the river have been flooding, washing raw sewage into the river. Nixon said while he doesn't want more sewage in the river, clean drinking water is more important so towns don't have to be on boil order. The governor said the state will be focusing its efforts on three things; making sure not a single life is lost from Nebraska to St. Louis, protecting as much property as possible, and once the water recedes, helping everyone affected get back to where they were before the floods.