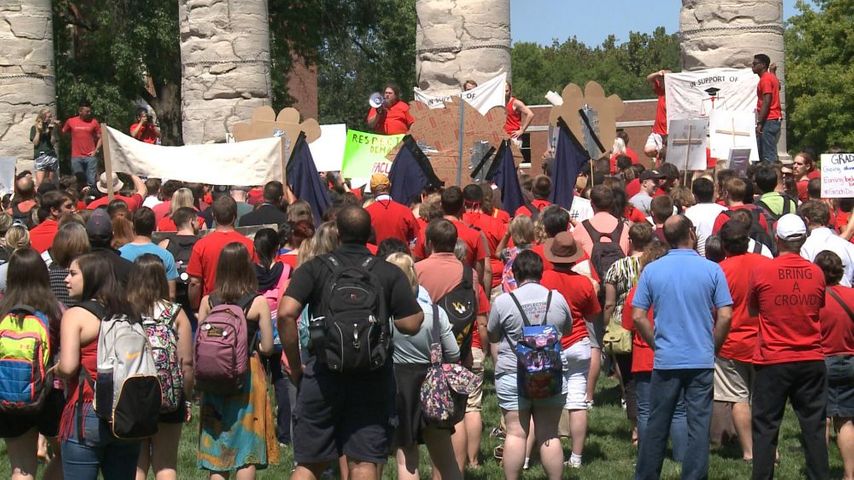 COLUMBIA – The Coalition of Graduate Workers (CGW) said it will take legal action against the University of Missouri if necessary if the school doesn't recognize the student's formation of a union.

According to a news release from the CGW, 84 percent of MU graduate students voted to unionize in Monday and Tuesday’s elections.

The CGW said it will only take legal action if the university does not recognize graduate students as employees, and if they do not recognize the result of the students’ recent election.

“We would still prefer it, absolutely, if they would understand and recognize the results of the election for what they are,” said Eric Scott, MU graduate student and co-chair of the CGW. “Which is to say, a mandate from graduate student workers that they want a union and that they would just recognize us and we can avoid all of that, but we are absolutely ready to go on that legal action.”

Tensions between the university and graduate students have been strained since MU suddenly announced in August it would no longer be offering health insurance subsidies for graduate students. That decision was rescinded after students and faculty voiced protested.

Graduate students have since demanded wages for graduate assistants that are above the poverty line, on-campus child care, affordable housing, tuition waivers and a guaranteed, fully subsidized health care plan.

Scott said he was "ecstatic" about the results of the union election.

“This whole year, the process of organizing this union, in some ways, was like taking on another full-time job in addition to the job I already have teaching students here,” he said.

With the help from the League of Women Voters, MU graduate students set up the election themselves after the administration did not offer any assistance.

Scott said they originally asked university officials to work with them to create the election.

“They sort of beat around the bush for a couple of months and then said, ‘no, we’re not going to work with you on an election because we think there’s this legal uncertainty about whether or not you can count as employees,’” Scott said.

Scott said a union will be a way to solve issues before there is a level of crisis.

“We’re looking for something that provides a framework for us to negotiate and build up a system for the future, so that we don’t have to have big crisis years like this one in order to get anything done,” Scott said.

He said the organizer of the last attempted union at the University of Missouri, Jackie McGrath, has been in contact with him.

In a recent letter to the editor published in the Columbia Missourian, McGrath expressed regret over stopping the efforts to form a union during her time as a graduate student in 2003. She said the efforts ended when the university met McGrath’s immediate demands of covering the premium of grad students’ health insurance plans.

In an email to graduate students on April 6, MU Interim Chancellor Hank Foley said he was surprised and disappointed that administration was not consulted regarding the announcement of the election. Foley said that, because there is a question of the legality of a graduate student union, the students’ decision to unionize could not be recognized by the university.

Scott said Foley’s statements were confusing to the CGW.

“That was a very puzzling statement to us, since we had been in meetings with administration since January telling them about our process and our timeline,” Scott said.

According to Scott, the CGW sent emails to Foley and other administrators, including the Board of Curators, just hours after the polling centers were approved to be in the MU Student Center and Memorial Student Union.

“If it was a surprise then that points out that there must be some pretty bad communication failures within the hierarchy of the administration,” Scott said.

The university issued a statement on the matter via email: "The University will not consider the graduate students’ vote binding until the larger question of whether students can unionize in Missouri is resolved. Legal counsel representing the Coalition of Graduate Workers indicated on March 12 that they were going to seek a declaratory judgment from the courts regarding this issue, but to date, this has not been done. In the interim, we will continue to work collaboratively with them to address their remaining concerns."

The legal question is whether or not graduate students, working as teaching assistants, are considered employees.

Scott said graduate students want to unionize because of how they are treated.

The Graduate Student Experience Task Force met from May to December 2015 to analyze issues affecting graduate students. It consisted of graduate students, professors and deans at the University of Missouri. The findings were published on December 22, 2015.

There has been a recent shift in legal precedent within the realm of private universities. The National Labor Board ruled in a 2000 case concerning graduate students at the New York University that they should be considered employees. The same judicial body reversed its course in a 2004 case dealing with graduate students at Brown University.

During the annual State of the University address in January, Foley announced that, beginning in July, the minimum stipend for graduate students would increase by $3,000 a year to $15,000.

While administration said they have been working with the CGW on things like stipends and graduate student housing, Scott said students want to see a bigger change.

“We’re looking for something more than just the solution to a few pressing issues,” Scott said. “Obviously it’s very important to us that we seek movement on all of those issues, but we’re also looking for a more permanent solution.”