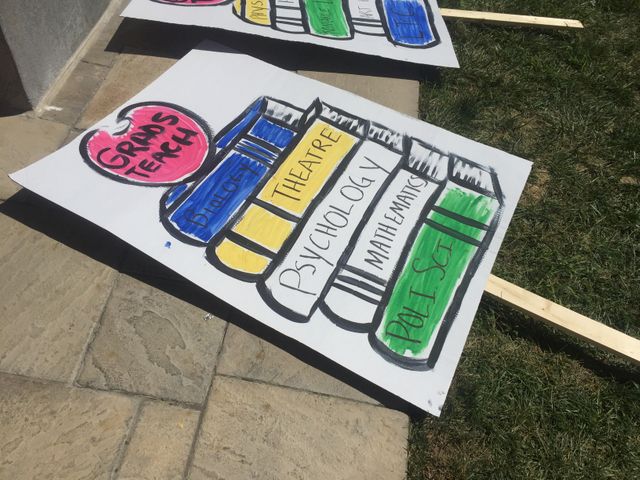 COLUMBIA – Graduate students at the University of Missouri say while they've achieved a lot of success in the past three years, there's still a long way to go.

The Coalition of Graduate Workers from the University of Missouri gathered together on Wednesday for their 3rd annual Rally of Graduate Rights to not only celebrate its accomplishments, but to figure out what's next.

“The major victories being getting our insurance subsidies back from the university after they revoked them and also getting those stipend increases,” said Joseph Moore, the outreach officer for the coalition.

In 2015, graduate students learned the university was planning to no longer subsidize their health insurance plans due to an IRS interpretation of the Affordable Care Act, only hours before it was to take place.

After students protested and staged a walkout, the university reversed that decision and agreed to increase fellowship stipends.

Moore said progress that has happened is due to the work of the graduate students.

“Because of sustained pressure from graduate student employees, the university agreed to increase that,” said Moore.

While highlighting victories, the coalition also spoke about issues it plans on tackling in the future.

“Celebrating those victories but also recognizing the struggles that still lay ahead,” said Moore.  “And continuing to press our demands, our primary demand from the university which is recognition of our union, which they continue to deny.”

The graduate student body voted to affiliate with the CGW in spring of 2016. The CGW is affiliated with the Missouri National Education Association.  After the vote, the coalition went to the university to ask to be recognized as a union. Moore said they refused and argued they weren’t employees of the institution in which they filed a suit.

University spokesman Christian Basi said the university is looking into the issues graduate students have.

“I know that the chancellor is learning about the history of what has happened over the last two years, specifically with graduate students,” Basi said. “And he’s reviewing all of that but he is looking forward to address the issues that they’ve raised.”

Moore said the end goal is recognition and a contract that guarantees things they've already been promised and making sure these promises are kept.