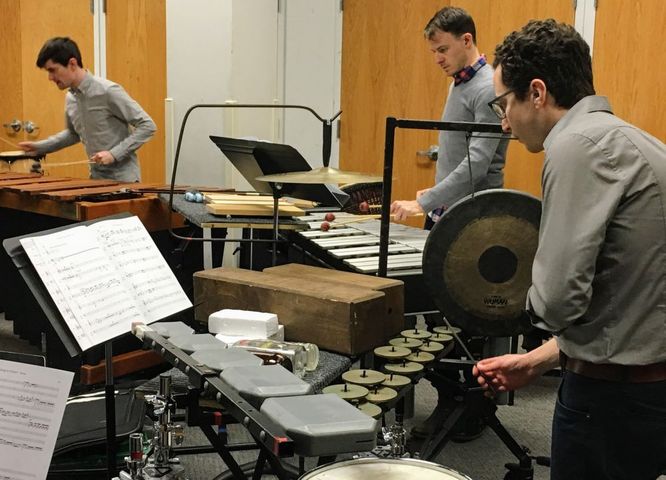 Julia Gaines, Director of the School of Music, said the group of four musicians provides a truly a unique musical experience.

“They happen to hit things as percussionists, but they will hit everything from what you’d assume is a concert snare drum to a flower pot or piece of wood,” Gaines said. “They hit just about anything. Most people have most likely never heard anything like it.”

The ensemble’s headline performance will take place Friday at 7 p.m. in the Missouri Theater.

Jacob Gotlib, Managing Director of Mizzou New Music Initiative, said the group can go beyond just whacking objects to using electronic instruments, building instruments live while performing and playing traditional instruments in a novel way, like contracting the skin of the drum to change the sound.

“It’s not classical music like Bach or Beethoven or Mozart,” Gotlib said. “Most of the music is new, written by living composers, frequently experimental, uses sounds, instruments, techniques that often have never been heard before. They tend to be drawn to music that makes drums sing.”

The goal of the Mizzou New Music Initiative is to bring in guests and performers to help K-12, undergraduate and graduate students explore all aspects of composition. Third Coast Percussion is especially unique with a skill set allowing interaction from elementary programs to university residencies to professional recordings, concerts and large-scale percussion events.

Since arriving in Columbia on Monday, the group has presented to the entire School of Music at convocation, performed with the MU percussion ensemble, given an interactive presentation at Lee Expressive Arts Elementary School and lead reading sessions with local composers.

While the Mizzou New Music Initiative regularly brings in upper-echelon talent, it's rare for a group's involvement level in the school and community to reach this level.

“I think it’s real special for our students that we’re able to bring in these guests,” Gaines said. “It costs money, and not every school can do this. We consider it a real privilege to introduce our students and the community to Third Coast Percussion.”

Gotlib said, “Frequently when we bring in guests they work primarily with composers and the composition department, but Third Coast Percussion’s involvement, both in the school and community, has been quite a bit more extensive.”

Collaboration like this is one of the biggest benefits of the Mizzou New Music Initiative, as it teaches students about all aspects of the composition process.

“The extent of collaborative relationships is very unique between the people who write the music and the people who play,” Gotlib said. “This is something that is developed together, and it was very interesting for our composers and percussionists to see how that plays out.”

Gaines said she believes bringing in new voices like Third Coast Percussion reinforces for students the potential success that’s out there, which is one of the most exciting parts.

“They are a successful group of four musicians, not associated with the symphony, making a true living making music,” Gaines said. “We’re encouraging our students that they can truly make music with any three individuals they want. Who would have thunk a group of four drummers could just win a Grammy? We’re thrilled that they’re here to tell our students how they did it and how our students can adopt some of the things they’ve done.”

Third Coast Percussion also holds an emerging composer partnership every year where the winner gets to write a piece of music for them to perform. Gotlib said it’s purely coincidence that this year’s winner is a Mizzou alum, Jose Martinez, who spoke with students and worked with the group this week in preparation for a later premiere in Chicago.

“To have a student comeback and say ‘I was here at Mizzou and Mizzou prepared me for this next step to work with Grammy winning ensembles’ is something that I think is very inspirational for all our students,” Gotlib said. “It shows them a series of possibilities, maybe in their future, for ways of making music, for ways of building life and a path through music that maybe they hadn’t considered before. “

Tickets for the performance are at concertseries.org or the Missouri theater box office. While Third Coast Percussion is the main featured guest this semester, the Mizzou New Music Initiative brings in new guests throughout the spring with sessions and performances open to the public.