Greitens' does Facebook Live on education, broadband and assassination comments 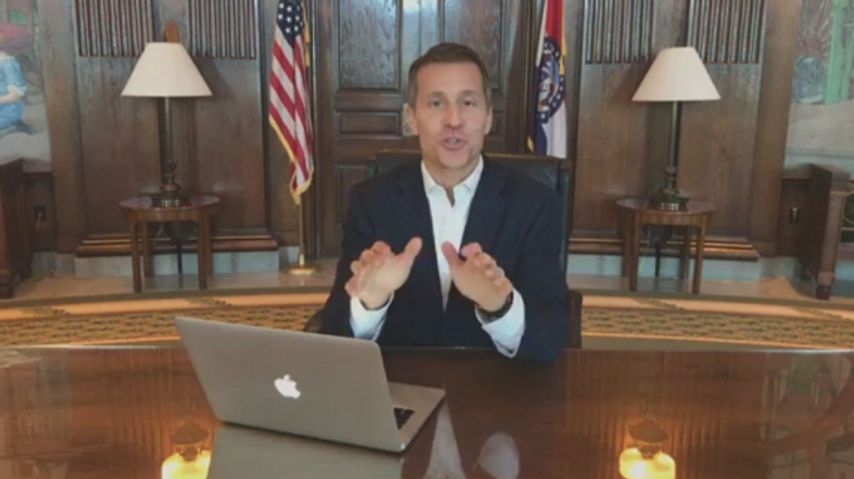 It was just one of many topics the governor covered during a Facebook Live Q&A session Wednesday morning.

Greitens said if she does not resign, "steps will be taken to remove her."

One Missourian asked Greitens about veteran suicides. He said veterans need purposeful work when they return home to the United States in order to integrate back into society. Missouri will now recognize military certifications in order to make sure more veterans have jobs.

"One of the things Missouri did, first state in the country, was to recognize the certifications for the Air Force practical nursing certifications so that Air Force nurses could come back to Missouri and start practicing."

Greitens said Missouri will lead the way in working with all five military branches to make sure all military certifications are recognized.

Greitens said there is usually also a substance abuse problem involved in veteran suicides, and wants the state to focus on the success of veteran courts, pointing out 73 percent of Missouri veterans are graduating from drug courts.

"The point of that is drug courts are working for veterans and we need to expand this program around Missouri so that when we do have veterans who come home who have some  sort of substance abuse issue we can take care of them here at home."

Greitens said that Missouri is now investing $45 million with the help of private investors and the federal government to provide high-quality, high-speed broadband internet to schools in rural Missouri.

Greitens said every school in rural Missouri will receive internet without having to pay additional money.

The state of Missouri is investing $6 million, while private investors and the federal government are kicking in the extra $39 million.

"It is essential to education," Greitens said.

Greitens said he plans to expand on this to provide broadband internet to businesses, communities, farms and families in rural areas.

The governor also discussed his plan to cut spending by $157 million in Missouri's education budget in order to avoid increasing taxes.

He said he had to choose between raising taxes or cutting spending.

When asked about the future of MU, Greitens said he has worked closely with the university's new leadership and he has appointed new Board of Curator members that will help cut programs that aren't working.

Greitens said the curators he has appointed are asking the tough questions about salaries, administration and programs that will make MU excellent again.

"It's a great institution, it's obviously in a tough spot right now, but I think with new university leadership and some fresh blood on the board of curators we are going to be able to take Mizzou in a new direction."