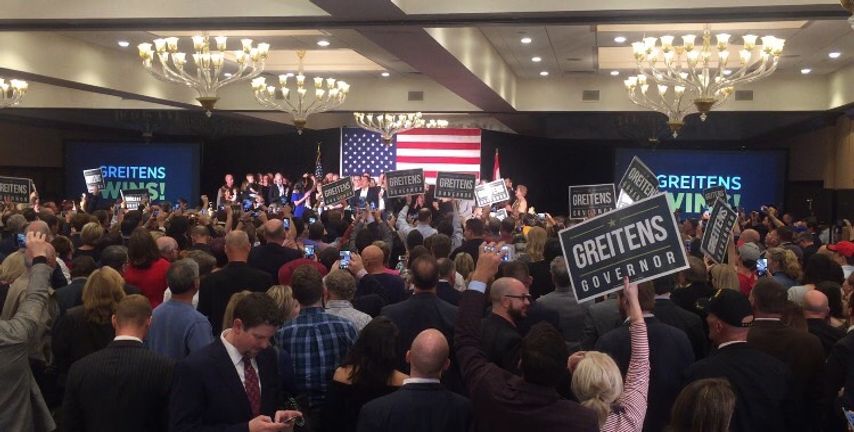 CHESTERFIELD — Behind a strong grassroots campaign, Republican nominee for governor Eric Greitens rode a late wave of momentum to victory Tuesday night in a race he was not predicted to win.

The energy in the room was high as a large crowd of supporters waited all night to find out the results.

Greitens spoke after the announcement was made.

"We knew what was at stake and how many people were counting on us to win this election," Greitens said. "We did more than win this election. We restored power to the people and we took our state back."

Greitens also reached out to Koster's supporters in his speech.

"We want to let everyone with Chris Koster know, we're here to serve them as well," Greitens said.

Crowds frequently erupted in cheers throughout the speech.

Bob Tomlinson is one Greitens supporter at the watch party who said he supports Greitens because he's a veteran like himself. Tomlinson served in the Vietnam War.

Greitens' campaign manager Austin Chambers said in the days leading up to the election, all of the momentum had shifted to their side.

Chambers said the campaign "built it's own ground game" and that it's been a "grass roots movement through the entirety of the campaign."

This race for governor was unique.

Greitens is a former Democrat who ran in this race as a Republican and Koster was a former Republican running as a Democrat.

Greitens promoted himself as an outsider - lacking in political experience, but heavy in military saviness and leadership skills. Koster was recently quoted saying that the governor's office, "is not an entry level job."

Koster, Missouri's current attorney general, emphasized conservative values throughout his campaign, a rarity for democratic nominees. Koster was also the first democratic candidate for governor to receive the endorsements of the National Rifle Association (NRA) as well as the Missouri Farm Bureau.

Gov. Jay Nixon will be finished with his time in office after two terms, leaving the spot open for Greitens to fill.