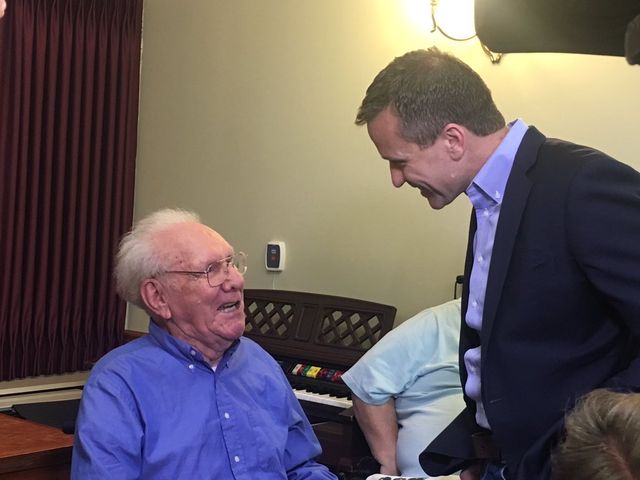 MEXICO - Gov. Eric Greitens visited the Veterans Home in Mexico on Tuesday, after releasing investigation results from an assessment of all Veterans Homes across the state.

“The government has failed our veterans,” said Greitens as he addressed the media.

After a 2017 investigation revealed serious issues inside of the St. Louis Veterans Home, Greitens and his staff, along with the Department of Public Safety, have been making efforts to reform the living conditions for veterans inside of the homes.

Since the governor's office released results of the St. Louis home, the state government replaced the executive director and an administrator at the state facility. The state then launched independent investigations, through Harmony Healthcare International (HHI), of every single Veterans Home across the state.

The results indicated shocking evidence, from the six different Veterans Homes. The facilities and staff were graded based on comments from veterans, staff, community and family members in the following areas:

HHI then gave a “risk assessment” for each home based on the results.

For the Mexico and Warrensburg location, almost 90 percent of the feedback and comments from the investigation team said these two locations had a minimal risk factor for veterans living inside of the homes.

The Cameron and Cape Girardeau locations were at high risk for veterans living inside of the home.

The Mount Vernon and St. James locations were ranked with a moderate risk level for residents.

As a former Navy SEAL who served in Iraq, Greitens said he saw veterans getting the run-around from the government. He said he wants to change that.

“You can’t govern from behind the desk, and we’ve been out on the front lines talking to people about what we can do in our veterans homes,” Greitens said.

Other veterans said they were elated about Greitens taking the time out to come and visit him.

For Veteran Dwight Hudspeth, a man who served in the Marine Corps for 32 years, said he believes there are a few things the home could work on.

“I think the staff need to be better trained on what exactly a veteran is, what we did for the love of our country.” Greitens thanked him for his input and gave Hudseeth a coin.

“The coin is a very big item to have, especially coming from the governor,” Hudseeth said. “I am thrilled because we have a warrior and a veteran at the governor’s office, who’s doing what he said he was going to do for us."

Last week, the governor went to the Warrensburg Veterans Home.