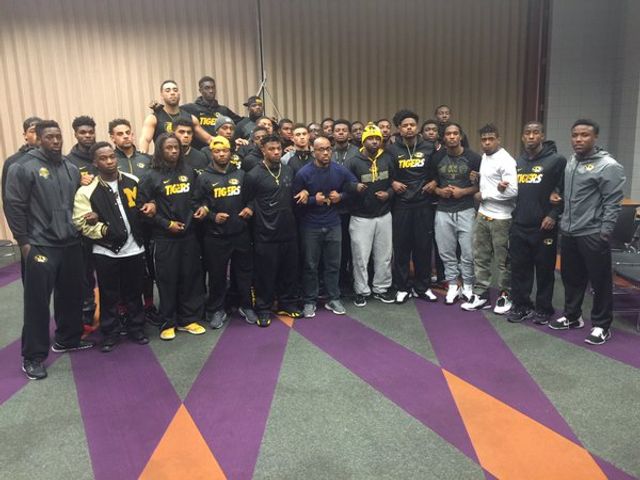 COLUMBIA - Members of the Missouri football team are standing with the #ConcernedStudent1950 movement on MU's campus. The movement's goal is to remove UM System President Tim Wolfe over his response to racist incidents on campus.

The players pledged (full statement below) to "no longer participate in football activities until President Tim Wolfe resigns or is removed."

Just after 8 p.m. on Saturday, defensive back Anthony Sherrils tweeted out this statement and photo.

We're black. Black is powerful. Our struggle may look different, but we are all #ConcernedStudent1950 pic.twitter.com/obCjSWCFVY

Sherrils is a sophomore from Kansas City. Many members of the football team, including running back Russell Hansbrough, retweeted the photo and statement.

J'Mon Moore, Bud Sasser and Jimmie Hunt said that they will not participate in any football dinners as alluded to in the tweet by Sherrils.

Mizzou Athletics just put out this statement, "The department of athletics is aware of the declarations made tonight by many of our student-athletes. We all must come together with leaders from across our campus to tackle these challenging issues and we support our student-athletes right to do so."

KOMU has also reached out to President Tim Wolfe for a comment.

(Editor's note: This story has been updated with the latest information)