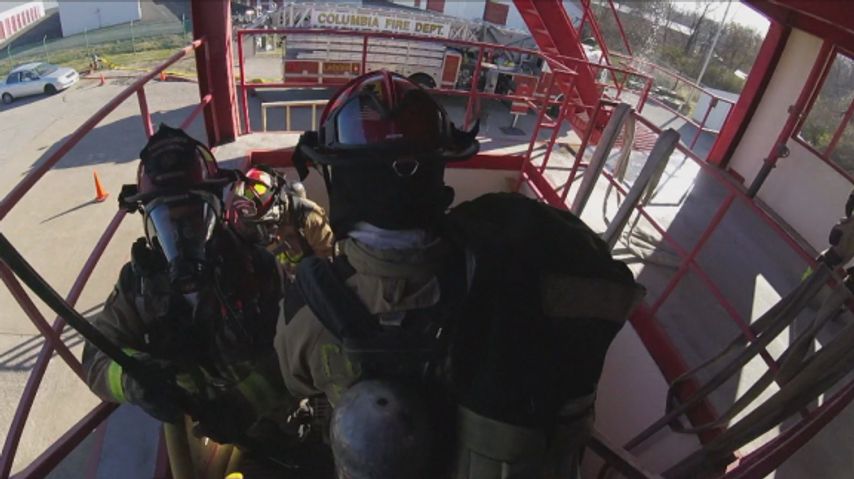 COLUMBIA - Firefighters scrambled to get into a burning building Thursday morning, but no one had called 911, and there was no need for any sirens.

The Columbia Fire Department presented a training scenario simulating a high-rise building on fire Thursday after the Fire Marshal's Division identified these kinds of structural fires as a challenge.

"We're trying to get ahead of the game and basically prepare ourselves," Peter Amartin, chief training officer, said. "If you look at the downtown landscape, it's not like it was 20 or even 10 years ago."

The Training Division designed a live-fire simulation for firefighters to go through.

"We have a training tower. It's a four-story training tower adjacent to a burn building, where we can burn in," assistant fire chief Brad Fraizer said.

Firefighters climbed up the drill tower's four stories, came back down, walked next door to the burning building and put the fire out. There were also simulated victims firefighters rescued in both structures.

Amartin said moving through these structures is very taxing for firefighters.

"Just our gear alone probably weighs 70 pounds and then we're carrying extra equipment. You're usually carrying 100 pounds, if not greater, of equipment you need to do the job," he said.

Fraizer said there was major incentive in completing this training.

"Learning how to get all the equipment needed in a high rise fire up to where they need to get it and what that feels like, it's a chance to test our abilities and fine tune where we need to," he said.

The entire scenario was based off a real commercial building downtown.

"Now if we have a fire there, we have a plan. That's the overall goal," Amartin said.

Fraizer said the department it will continue to run this training once a year.