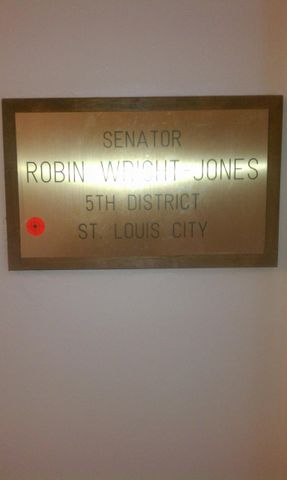 Democratic Sen. Jolie Justus, of Kansas City, says a small sticker with an image of a gun crosshair was found Tuesday afternoon near her office door. She said the sticker was removed, but someone later replaced it with a larger one. Several other Democratic senators said they also were targeted with the stickers.

KOMU 8 spoke with Senator Curls, who said the incident was very concerning. She found two crosshair stickers on her name plate Tuesday afternoon. She said incidents like Gabrielle Gifford's shooting makes it important to take events like this seriously. She said she is "grateful" the capitol staff is not attempting to minimize the situation. While she has no idea why the five senators were targets, she pointed out there are currently three African American state senators currently in office. She said all three received stickers.

Senators were debating legislation Tuesday related to President Barack Obama's health care law. Justus is one of several Democratic senators who have opposed the Republican-backed bill that would require legislative or voter approval before the state could take steps to implement a health-insurance exchange.