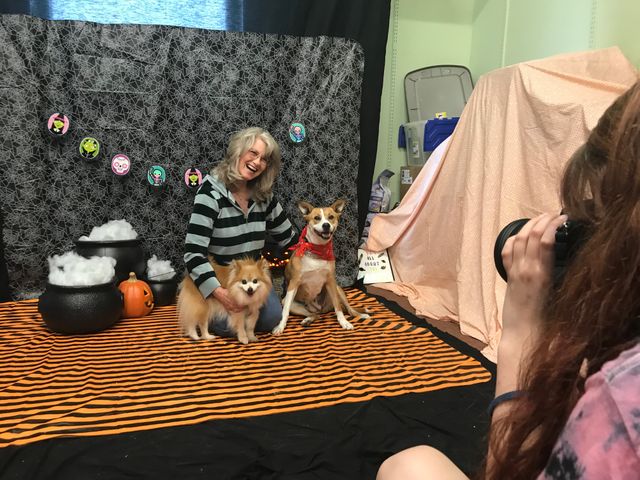 COLUMBIA - Pet owners brought their dogs and cats to Lizzi and Rocco’s pet store for a halloween themed photoshoot.

For a $10 donation the owners get a print and digital version of their photo with their pet.

Second Chance volunteer Hannah Turner said the proceeds from today’s photo shoot today will be turned into food, crates, medical bills to spay and neuter the animals and anything else the non-profit needs to help rescue the animals in the shelter.

Turner’s two dogs are adopted. She said she believes adopted animals have a sense of gratefulness that dogs from pet stores don’t have.

“When you adopt an animal they know it,” Turner said. “They know they’ve been rescued and you gave them a family.”

Sandy Dirks got her photo taken today with her two dogs, Prince and Nyla. She adopted Nyla from Second Chance five weeks ago.

“Once they’re in your family they become a member and their lives are saved,” Dirks said.

“You’re saving a life, when else can you say that,” Turner said.

Dirks said she’s always adopted her dogs and couldn’t imagine her life without her pets.

“They’re our companions and friends,” Dirks said. “They make your life joyful.”

As an animal lover, Turner said she cherishes her pet’s unconditional love toward her.

“When you walk in the door and you have someone so excited to see you, there’s nothing better,” Turner said.

Some adoptable dogs also got their photos taken today. All the photos from today will be on Second Chance’s facebook page.