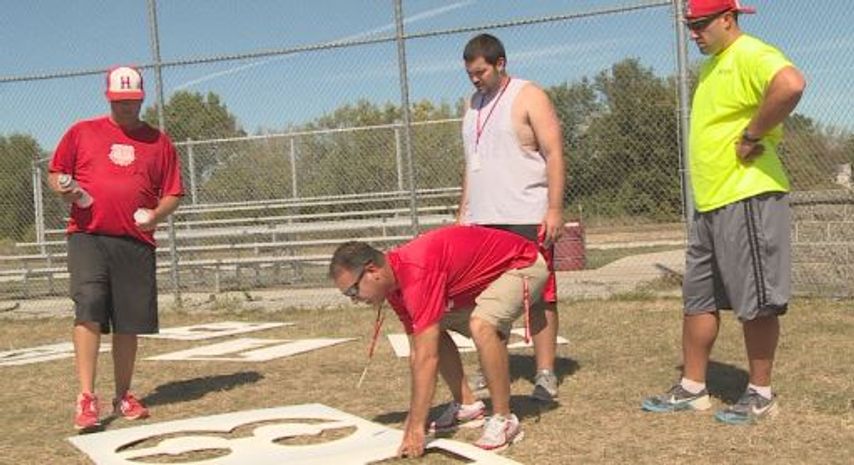 HARRISBURG - Community and friends gathered at Harrisburg High School to honor the life of Coach Brian Simpson, who was killed in a car crash on Route F west of Sturgeon Thursday.

Athletic Director Doug Fessler said the community made a memorial for Simpson on the baseball field Simpson helped put together.

Fessler said he and other community members wanted to come up with ways to make a memorial meaningful, so they set out to improve the field.

"This was his field. He helped build it with his own hands, he raised a lot of money," Fessler said. "He did the leg work for it, and this was his baby. So we decide we wanted to make the field nice."

Fessler said, within 24 hours, he and other coaches renovated the field.

"We wanted to make it nice for people to bring whatever they want to the home plate if they feel they want to leave something for coach," Fessler said.

He said the group painted on the field the date of Simpson's death.

"He's never going to be forgotten, so we decided to put the numbers out there."

The Harrisburg R-8 School District released a statement on Facebook informing the Harrisburg community that school is not in session to honor and mourn Simpson's loss.

Superintendent Steve Combs said, although school was canceled, the school building is open to the public for grieving.

"We met with teachers and counselors, we're here to help our teachers and our kids," Combs said. "We opened up our building for kids to just come in and to visit and talk to counselors."

Combs said he will never forget Simpson and his role in the community.

"It deeply saddens me that we lost such a valuable member of our community in Mr. Simpson," Combs said. "It really sent a shock wave through the community."

"Kids loved him, respected him," Combs said. "They really worked hard for him. It's a tragic loss."