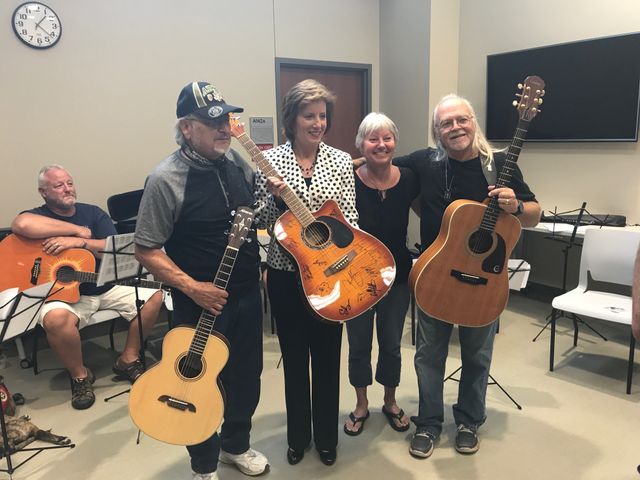 The visit comes one day after President Trump’s announcement to send more American troops to Afghanistan.

Rep. Hartzler said she was glad that Trump expressed his desire to pressure Pakistan in his statement.  She also said she feels President Trump has listened to those with whom he works.

"Afghanistan is a tough situation but I do think it was wise that he listened to his generals on the ground and he's following their advice.  And that's what we need to do is to make sure that we keep our nations safe there and that ISIS and others that are coming in there don't get a foothold," said Rep. Hartzler.

Hartzler participated in a class provided by The Healing Box Project.  Hartzler has recognized the project and its founders David and CJ Dunklee on the house floor before for their work with veterans.

The Healing Box Project provides an outlet for veterans to heal through the power of music.  The project is a nonprofit organization.  Dave Dunklee teaches the lessons himself.

"The Healing Box's Project's motto is the box is the guitar and the healing begins with the first strum," said David Dunklee.

Both Dave and CJ Dunklee travel from their home at the Lake of the Ozarks to the Harry S. Truman Memorial Veterans’ Hospital.  Dave Dunklee teaches two classes each week at the hospital.  He says programs like The Healing Box Project are important for veterans.

"Taking their mind off of all of that and all of the trauma of war, it is just erased with the strum of a guitar.  That's why we're here every week, to give them something a little different," said David Dunklee.

CJ Dunklee says programs like the one endorsed by Hartzler help veterans with certain trauma.

"It has helped a lot of these men and women, especially dealing with PTSD.  They get relaxed and their mind just goes to a better place," said CJ Dunklee.

The classes are free to veterans who can call the veterans’ hospital to be signed up.  Guitars, guitar picks, and other supplies are also free to veterans.  Dave Dunklee travels and plays his guitar for donations to the project.

Hartzler listened to one class of veterans play their guitars, and even joined in playing a song herself.

Before leaving the veterans hospital, Hartzler spoke with the veterans who attended the first lesson. Several veterans expressed their thanks to both Hartzler and the Dunklees.