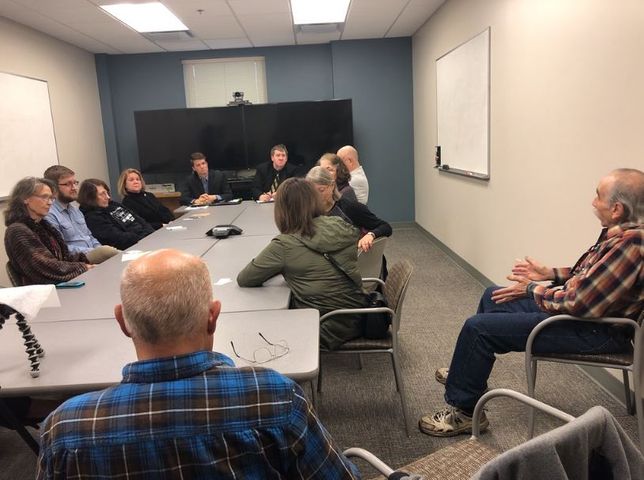 COLUMBIA - Voices were raised and tensions were high as members of the community told staffers what they think Rep. Vicky Hartzler, R-Harrisonville, needs to be working on.

Some of those gathered at the Boone County Government Center were upset Hartzler didn't make an appearance and sent two staff members.

Staffers Steve Walsh and Kyler Cliffman said Hartzler has, in fact, held meetings in Columbia, with groups such as CoMo for Progress.

A member of CoMo for progress took issue with that.

"Do not use our group's name if you refuse to meet with us, on conditions that are just not in the public," Kate Canterbury said.

One of the attendees said two meetings in seven years of Hartzler being in office is unacceptable.

Walsh said it was CoMo for Progress that cancelled one of Hartzler's appearances.

Issues such as immigration were discussed. Some said they believe there should be more strict rules regarding it, while others were opposed.

Simona Simkins talked about her Mexican heritage and the hard work her parents put in to get her to where she is. She said Hartzler needs to speak against the "hateful narratives."

"Be more vocal to what is unjust rhetoric and racist and hurtful rhetoric and to censor the president as well," she said.

Hartzler backs the repeal and replacement of the Affordable Care Act. One attendee said she would like to see Hartzler formulate a better plan for health care.

One attendee said she receives social security and is concerned about the tax cuts.

"What's going to happen when the tax increase means no money in the budget?" she said.

The director of Mid-Missouri Peaceworks, Mark Haim, said he worries about climate change, but did not get to address it to Hartzler's staff.

"We need to take action now," he said.