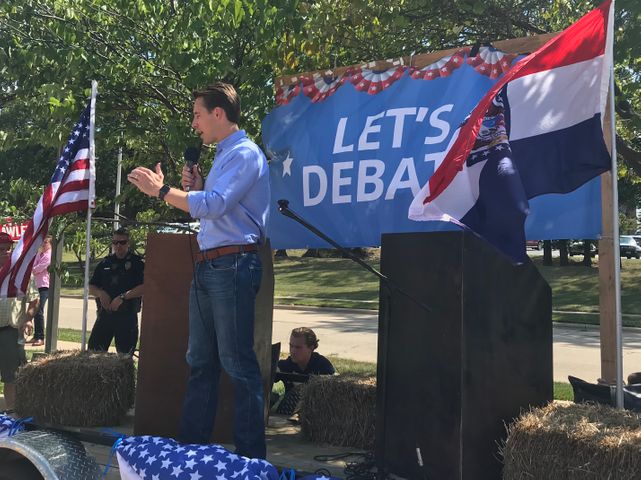 COLUMBIA - Missouri Attorney General Josh Hawley made a stop in Columbia Tuesday on his "Let's Debate" tour, challenging Senator Claire McCaskill to a political debate on a trailer.

Hawley said he has challenged McCaskill to the debate for months, but said she keeps avoiding the request.

“She can come up with excuses 'til the cows come home, but at the end of the day, people want to see results and they want to see her held accountable," Hawley said.

He said voters would benefit from asking the candidates their own questions.

Hawley said the trailer debates would allow voters to hear directly from the candidates.

"Person to person, no notes, no props, no binders, no stunts. Just the old fashioned debate of the traditions in this country," Hawley said.

In her team's written statement, McCaskill said the debate challenge is exactly the stunt Hawley claims he wants to avoid.

"This is a stunt, complete with hay bales, and Missourians will see right through it," the statement read.

Hawley described McCaskill as a "capable debater." He said she is not afraid of debating, but he said she is, instead, afraid of her record.

McCaskill's statement countered this, stating McCaskill has given voters the opportunity to ask questions.

"Claire has debated many times. And she has held over 50 town halls where any Missourian was welcome to ask her any question. She has already accepted a number of debates and looks forward to them," the statement reads.