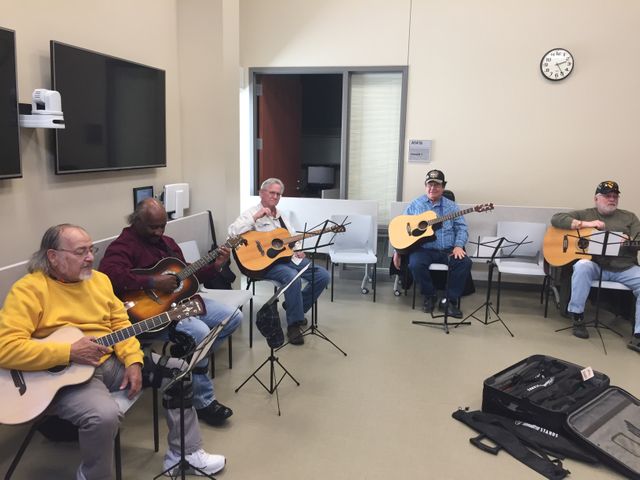 COLUMBIA - The Truman VA has a new way to help veterans fight the blues by using the blues.

The Healing box Project is a program that helps veterans combat mental illness by playing the guitar.

Healing Box Project founder Dave Dunklee said, "Now that I'm retired I can actually do something to help them through the battles that they face."

The program works by giving veterans donated acoustic guitars, and teaching them to play in class-style lessons.

Veteran Jim Gaertner said that when left for the Vietnam he was a lead guitarist in a band, but when he returned he could not play the instrument.

"I just couldn't get my hands to do what my brain was telling them to do," Gaertner said.

He say now with the help of the Healing Box he has been able to regain many of his old abilities.

"I've been able to reconnect in a manner of speaking with my youth which I lost in Vietnam," he said.

Veteran Conrad Ruybal said he loves that even in his old age, he can still rock.

"I've come a long ways and to think that a 77-year-old man could play a guitar and play a little blues which I really feel like is an accomplishment," Ruybal said.

The program goes beyond helping people learn how to play the guitar. It has also been crucial for some veterans battling depression.

Veteran Ricky Moore said, "It's something I always wanted to do; it's therapy, plus I learn how to play a little bit."

Moore is not alone. Ruybal joined the group in 2016 after he lost his wife. Until joining the Healing Box Project, Ruybal said he felt isolated.

"It's not the same once you lose your wife, your house is like an empty shell," Ruybal said.

Both men say with the help of the Healing Box, they have something to look forward to every week.

"If I'm feeling depressed, knowing that I can come here to the Healing Box, I come out of that depression at least for that period of time," Moore said.

"It has been healing," Ruybal said. "It has helped me tremendously to keep on pushing, and to take everyday and enjoy it."

They also said that being around other veterans has added so many new people to their lives.

"When I get my guitar it kind of reminds me that 'Hey I got some friends out there and I'm waiting for Tuesday so that we can get together and jam,' and that's exactly what we do," Ruybal said.

Dunklee said what Moore, Gaertner and Ruybal have been through are exactly why he and his wife started the Healing Box Project.

"For those people that haven't smiled in years or haven't had any kind of enjoyment in years, the guitar and our sessions have brought enjoyment and life back to them," Dunklee said.