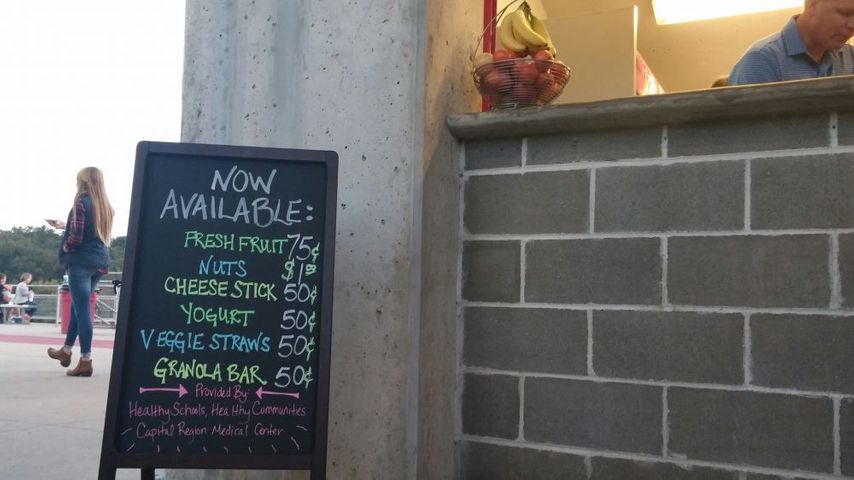 JEFFERSON CITY - A healthy concession snack program will be expanded to more sporting events in the next few years after it proved successful at home football games for Helias Catholic and Jefferson City high schools.

Healthy communities coordinator Ashley Varner said the program started at football games to have maximum visibility and impact. She said around 5,000 people attend each home game.

Varner said she wants the healthy concession snacks to be available at other sporting events, too.

"What we'd really like to do is work with our local school board and the football booster club and the parent club here at Helias and develop a healthy concessions policy," she said.

It costs the program around $100 per game for healthy snacks like apples, bananas, vegetable straws, granola, yogurt and packaged nuts. The snacks are sold for a dollar or less. Varner said keeping prices low was important.

"If I've got a, you know, a young child that's got $3 to spend and instead of going and buying a $2 bottle of pop and a candy bar for $3, he can literally get not only a cheese stick, a bag of nuts, fresh fruit and a yogurt, let alone another, you know, a bottle of water besides that, and that's a pretty substantial amount of food versus just that empty sugar from the candy bar and the pop," Varner said.

The nutritious foods are good for busy parents who don't always have time to provide a healthy dinner for their kids before attending a game, she said.

Kristin Bell, whose husband coaches at Helias, attended a football game with her young children Kenslee and Keegan. She said her children enjoy the vegetable straws, yogurt and cheese sticks.

"It also allows me not to have to worry about packing, you know, my own snacks," Bell said. "I know that there are some healthy options already at the game, and it also helps to encourage my kids to eat the same things at home as well."

Varner said she has received positive feedback from parents and staff, even though a healthy snack is less popular than a traditional one.

"It may not be selling more than a candy bar or a pop, but it's growing," she said.

Bell said she thinks healthy concession snacks would be good for all sporting events, but said colleges don't need them as much as middle and high schools because college students can buy healthy food for their homes whereas children cannot.

All of the proceeds from the healthy snacks at Helias and Jefferson City high schools go to the schools.