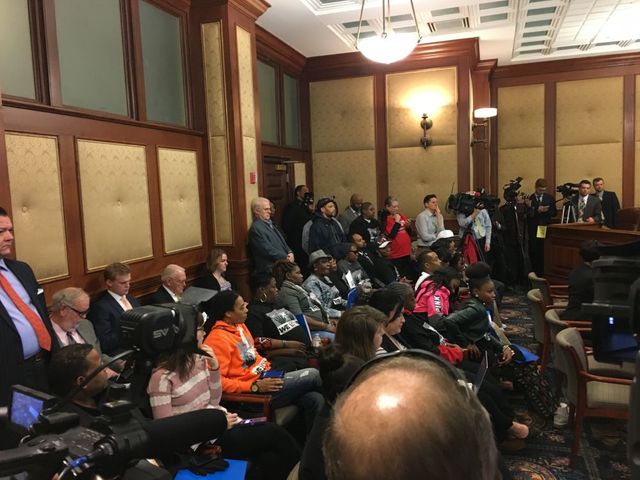 JEFFERSON CITY - Friends and family of Michael Brown were among an overflow crowd at a Capitol hearing on a Senate bill, which deals with police body cameras.

The bill is sponsored by Sen. Jamilah Nasheed, D-St. Louis. It requires law enforcement agencies in cities with more than 100,000 residents to "require their officers to wear a camera while on duty and in uniform  and record all contacts with people." Nasheed said the cities would be Saint Louis, Independence, Springfield, Kansas City and Columbia.

Michael Brown's mother, Lezley McSpadden, testified at the hearing. She said, while body cameras are needed, there needs to be "trust and a good foundation with the the police" for things to work properly during civilian encounters with police.

"When it is not captured, it is hard to tell what is accurate and what is not accurate," McSpadden said.

Joe Widmer, a resident of Independence, said he does not see a need for body cameras since police officers already have dash cameras.

"I just don't see it as necessary because it's getting into certain people's privacy," Widmer said.

Nasheed said she knows some people are concerned about that, but no footage would be available for the public to get until the incident report is released and completed.

The funding for the cameras would come from the Department of Public Safety.

No one testified against body cameras.

But, Kevin Ahlbrand, the president of the Missouri Fraternal Order of the Police, said he is in favor of police body cameras but thinks they should be a local municipality issue.

"The data storage is very expensive and I am not sure if the Department of Public Safety can bear those expenses," Ahlbrand said.

The bill calls for a police officer to be "suspended without pay until investigation" if he or she does not record encounters. Ahlbrand is against this part of the bill.

"There are numerous reasons why it may have not been turned on. Technology can fail and an officer might have simply forgotten to turn it on because he was in a rush," Ahlbrand said.

Nasheed said she is in "close dialogue" with the members of the law enforcement community, including the fraternal order.

Ahlbrand said, "We have seen the use of dash cams to be useful and this would just be another tool of showing what exactly what the actions the police officer has to face."