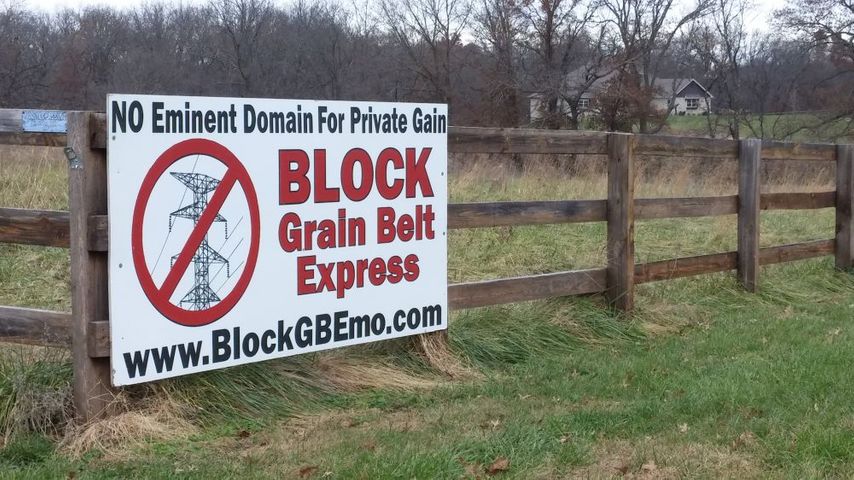 A sign along the road urges people to oppose the proposed transmission line.

RANDOLPH COUNTY - "NO Eminent Domain For Private Gain" is on a yard sign along rural Route NN a little south of Moberly. The sign sits on a fence surrounding one of many properties through which Clean Line Energy Partners wants to build the Grain Belt Express Clean Line, in order to transport wind-generated energy across several states.

Dennis and Laurie Smith own the home. They say they bought the home for its beauty and the proposed energy line would wreck that. Smith said he has done research on energy projects and found that other countries are dismantling their wind power generators due to inefficiency.

"This is an unknown entity that we are being asked to give up our private property rights for, and it's also a private company, which eminent domain was never meant to support," Smith said.

Other residents KOMU 8 News spoke to said they are against the energy line because it won't benefit the local area. One man said he likes to use the local power he already has.

Resident John Bondy said he doesn't like that a private company is doing it and wind energy has proven to be less effective than originally thought.

"We seem to be doing fine," Bondy said.

But many groups and people do see a point in building it. According to the company's website, the transmission line will bring energy to customers and utility companies in Missouri, Illinois and Indiana. A map on the company's website shows about 500 megawatts will come to Missouri.

Carolyn Amparan, chair of the Sierra Club- Osage Group, has been following the project for years and said the wind energy will cost 4 cents per kilowatt hour, which is less than what coal costs.

"We need to move to clean energy, and in order to do that we really have to update our electric transmission lines, or the power grid as its commonly called, because the sources of the low cost renewable energy, like wind, are in the Great Plains where there are not a lot of transmission lines, and we need to move that energy from the Great Plains to the urban centers where people need it," she said.

Clean Line said construction and maintenance of the line will create about five thousand jobs. Amparan said around 1,500 jobs will be in Missouri alone, and local manufacturing firms will provide supplies for the towers.

Amparan and other Sierra Club members will be at a public hearing in Moberly Thursday from 6 to 9 p.m. to voice their support. Members of the Block Grain Belt Express Missouri group will also be there to show their disapproval.

The group opposing the transmission line said it would affect 600 Missouri landowners, and the government using eminent domain for a project with little value to the state violates property rights. The group's website also states the line would require five to seven towers, each at around 200-foot tall, and each requires 200-foot land easements.

Clean Line would compensate property owners either $6,000 or $18,000 depending on the type of structure on their property.

Nearby resident Ray Roach said he doesn't know a lot about the proposed transmission line, but said some people might think the towers will "clog up our city with more stuff."

Other residents think the pros outweigh the cons.

"Directly it may not help here, but I think that it will reduce the amount of use of coal, therefore helping our environment," retired telecommunications technician Leroy Franklin said.

His wife, Judy Franklin, said she feels sorry for the people whose yards the line is going through, but it has to happen. She said "We are at the point of no return," referring to negatively affecting the climate with fossil fuel use.

Thursday's public hearing is at Moberly Municipal Auditorium at 201 West Rollins St. There are other hearings across the state, as well.