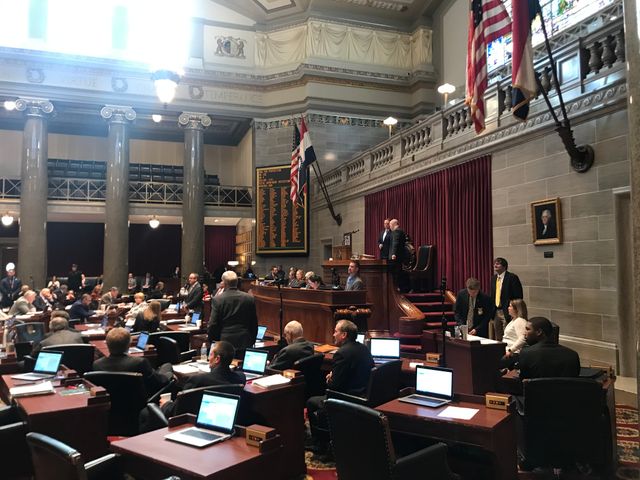 JEFFERSON CITY - Amendments to the fetal heartbeat abortion bill were passionately discussed across party lines on the Missouri House of Representatives'  floor.

HB 126 was perfected and voted to advance in the House to a third reading, despite lawmakers sharing personal stories in an attempt to persuade the assembly otherwise.

The heartbeat bill would make it illegal for a woman to get an abortion once there is a heartbeat detected in the fetus.

The bill's sponsor, Rep. Nick Schroer, R-O'Fallon said a heartbeat can be detected six weeks in to the pregnancy.

During the hearing last week, KOMU 8 News reported Erin King, an OBGYN, testified against the bill.

King said six weeks is the earliest a heartbeat can be detected. But, she said, the bill is nearly a total ban on abortion, because most women do not find out they're pregnant until after six weeks.

Of the eight amendments to HB 126, Rep. Rocky Miller, R-Lake Ozark proposed an amendment that would require a minor considering abortion receive consent of one custodial parent and provide written confirmation that the other custodial parent, if applicable, is notified of the choice to abort a pregnancy.

Opponent, Rep. Crystal Quade, D-Springfield said this amendment doesn't take into account families in sensitive family situations where a custodial parent might not be fit to notify.

Rep. Shamed Dogan, R-Ballwin proposed amendment 5 to the bill that would make it illegal to choose abortion on the basis of possible disability, gender, or race.

In opposition to Dogan, Rep. Deb Lavendar, D-Kirkwood tried to steer conversation to protecting children's life after birth. She received various objections to get to her point, but was ultimately cut off.

Taking a larger look at the national debate on abortion, Rep. Adam Schnelting, R-St. Charles applied a "trigger ban" amendment to HB 126 that would go into place if the Supreme Court reverses it's decision on Roe vs. Wade.

The trigger ban would make getting an abortion in Missouri a Class B felony.

In closing, Schroer thanked the assembly for remaining civil and said he was surprised the debate only lasted about two-and-a-half hours.