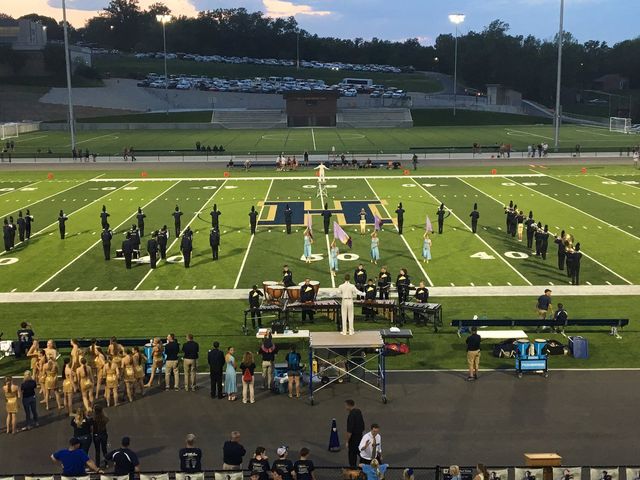 The school’s president, Father Stephen Jones, said this is a historic day.

Jones said the complex will be used for both “day-to-day use of the school” and future competitions and practices.

“So P.E. classes will certainly have use of it as they want and need it,” he said. “Keeps all of our student athletes close to the school and makes it convenient for both practice and for competition.”

Jones said in the past, the school used an old field on the other side of the school for P.E. classes and practices. Because it’s “not able to accommodate any kind of significant competition,” the athletes had to go to the stadium at Jefferson City High School on game days.

“It’s been a wonderful partnership and they’ve been very generous with us. But we’re just thrilled to be able to have our own,” he said.

Mary Douglas, a senior at Helias and a member of the school’s dance team, said “it didn’t feel right” having to go to another school.

“Like we weren’t in our own spot,” she said. “We were in somebody else’s turf.”

Douglas said she looks forward to having Friday night games.

“Because before, we had to do it on Saturday, like Saturday afternoons. Because it was taken up by Jeff City,” she said.

“It’s like real grassy, and it gets muddy, and it’s not very good for all year round,” she said. “I think it’ll be cool to have classes out here.”

“There’s something to be said for having your own home and your own place,” he said. “That’s just a source of pride for community, and hopefully, a source of growth for our community.”

The mayor of Jefferson City Carrie Tergin said as someone who grew up in the city, she feels proud to have the new complex.

“Helias Catholic is a such an asset to our community,” she said. “It has been for many years. And when you see these opportunities for growth, and opportunities for the students and families to make memories here, because that’s really what this is about.”

She said community support was what made the first home game possible.

“Everything turned out beautiful, I mean, for an August football game. It’s amazing and we have everybody here from the community here to kick off the great night of football here,” she said.

Douglas calls Friday night “the beginning of an era.”

“I think it’s really cool to have our school colors and everything all around the stadium, and it shows a lot of our school spirit and pride,” she said.

According to Jones, the school started a capital campaign in 2016 to raise funds for both the complex and a future fine arts center. He said all the major donors asked to remain anonymous.

“Most of our donors have a connection to our school in some way shape or form—either current parent, current families or either as alumni, or it’s just members of our community who want to see our community grow and be strengthen,” he said.