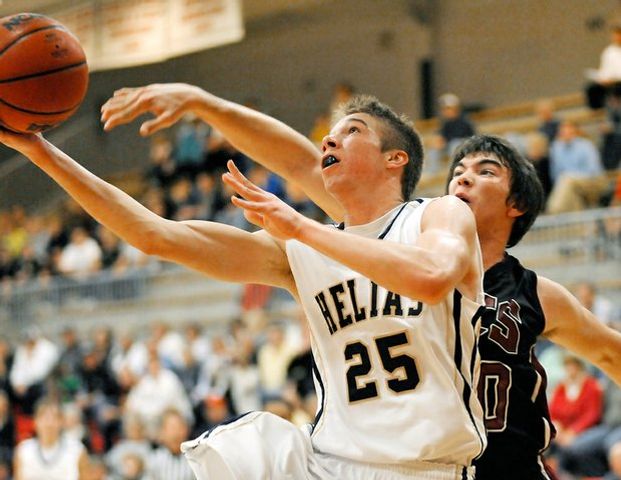 COLUMBIA - Helias graduate Zach Rockers will be staying close to home during his college years. Columbia College head men's basketball coach Bob Burchard announced on Wednesay that he had signed Rockers to a national letter of intent to play basketball for Columbia College this fall. Burchard signed three other players, freshman Tanner Sutton as well as juniors Ben Bowman and Marquette Murrell.

While in high school, Rockers earned first team all-district honors in the 2010-11 year forfootball, basketball and baseball. The 6-foot-3 center led his Helias Crusaders to three district title in basketball as well as a third place finish in the State tournament in 2009. As a senior, Rockers named second team all-state and Missouri Basketball Coaches Association (MBCA) all-state as well as being named the Columbia Daily Tribune MVP of the year. He also excelled in the classroom earning Academic All-State, Missouri State High School Activities Association Award of Excellence and the United State Marine Corps Distinguished Athlete Award during his senior year at Helias.

Tanner Sutton will join Rockers as an incoming freshman after a successful career at Harrisonville High School. Sutton led his team to conference and district championships his junior and senior years, averaging 15.3 points, 4.9 assists and 4.3 rebounds per game as a senior. Tanner earned all-conference and all-district titles twice and was named to the MBCA All-State First Team. Sutton excelled in the classroom as well, earning MBCA Academic All-State as a senior and collecting academic all-conference honors for three seasons.

Incoming junior Ben Bowman, a Warragul, Australia native, made his way to the United States in 2009 when he signed a two-year letter of intent to play for Southeast Community College in Beatrice, Nebraska. The 6-foot-7 forward was an NJCAA Region IX All-Region player his freshman and sophomore years at Southeast. Bowman averaged 10.8 points and 6.6 rebounds per game as a sophomore as well as shooting 77.9 percent from the charity stripe. Ben and current Cougar Matt Woodcock played together at Southeast during the 2009-10 school year.

Also transferring is Marquette Murrell, a 6-foot-6 junior forward from Memphis, Tennessee. Murrel comes to Columbia after spending two seasons at Glendale Community College in Glendale, Arizona where he averaged 10.9 points, 8.7 rebounds and 4.5 assists per game as a sophomore. He was named to the NJCAA Region I Second Team and to the All-Arizona Community College Athletic Conference Third Team. Prior to his seasons at Glendale, Murrell attended White Station High School in Memphis, Tennessee where he was named all-region in his senior year while leading the team to a 25-13 record and a state runner-up finish.

"We are very excited about the level, depth, and balance of this year's class. Ben and Marquette are extremely versatile players who will add experience and additional size to our line-up. Tanner and Zach are coming to us after extremely successful high school careers. I am pleased to add two Missouri All-State performers who have exceled in their sport and achieved high academic honors. We expect this class to make an immediate impact on our program," stated Burchard.