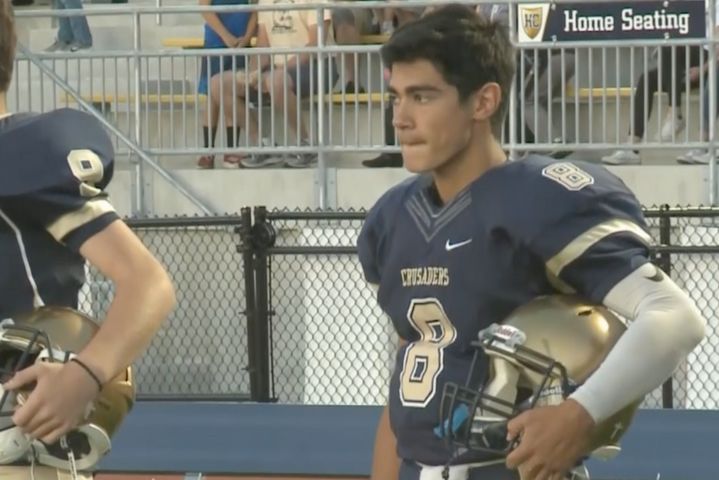 “I remember just the game against Rock Bridge, getting an interception. I remember just running as fast as I could, my visor fogged up, I couldn’t see anything, the adrenaline was just rushing so much,” Rhea said. “You feel like a god out there.”

Helias won the game, and later advanced to a second straight state championship game in 2013. The moment left quite the impression on John’s younger brother, Daniel.

“I just remember him going crazy. I was just like, I wish I have that one day,” Daniel said. “I literally thought of him as like a celebrity. I just really wanted to be like him at that moment.”

Now four years later the Rhea legacy lives on. Not through John, but Daniel. Who’s now the Helias starting quarterback.

Five years separates the two, with John now a senior at the University of Missouri and Daniel a junior at Helias. But the brother’s bond goes far beyond the Friday night lights.

“Whatever his older brother was doing that’s what he wanted to do,” John said. “It’s pretty cool to see that looking back now.”

“He’s been my biggest role model my entire life. I've always looked up to him, he's still my idol as to that's how that's how I want to live my life,” Daniel said. “I hope I'm half the man that my brother is and just keep striving for what he's all accomplished and what he's known for. All the happiness that he’s gotten, I want to have that feeling too.”

But dealing with how to fill a big brother’s, big shoes, is no small task.

“I mean, it’s tough to fill the shoes that he put down for me. But it's a good path I guess you could say. I enjoy being that person that he's set the tone for me to be,” Daniel said.

“I guess I have set the bar pretty high, but I don't really think he thinks that way. I think he kind of thinks of it as this is my shot to leave my legacy,” John said. “Not that he owes it to anybody, he should just be the best that you can be because that's honestly how you how you leave your mark, that’s how you'll be remembered.”

It’s a legacy that Daniel doesn’t take lightly, one that’s always on his mind.

“That’s always in the back of my mind just to always leave a mark as good as my brother did,” Daniel said. “Anytime my brother’s name is brought up, it’s a good trademark, and that’s what I want.”