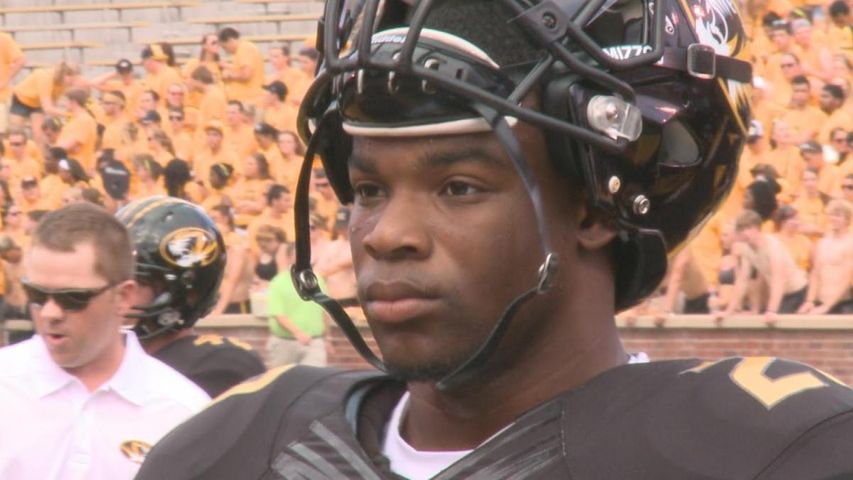 Entering the Texas game in 2011, Josey led the Big 12 in rushing. But he suffered a triple tear of his ACL, MCL and patellar tendon, which ended his season.

"Once I got upfield, the guy pulled me back from behind and I fell back on my knee, which crushed everything else," Henry Josey said.

"I kept looking at him and saw that he was not getting up. That's when I knew that it was pretty serious," Missouri runnings back coach Brian Jones said.

"Everything didn't really hit me until I went in the locker room. Seeing that my knee cap was on the inside of my leg, it was crazy. A feeling that I couldn't explain," Josey said.

"It was the worst injury that we've ever seen," Missouri trainer Rex Sharp said.

When asked if he thought he would play again, Josey said "That was the least of my worries. I just wanted to walk again," Josey said.

"We were never going to say that you would not come back from this injury," Sharp said.

"He knew it was bad and I told him we got a lot of work to do," Missouri team physician Patrick Smith said. "Hey, I'll do all I can to put you back together and you do your part and we'll see where things play out."

"I had to learn a great deal of patience and just find the strength to get up every day and do it all over again. I would cry every day. It was just really tough on me just getting through it," Josey said.

"I find myself asking why me and I wasn't myself at all. I didn't know who I was in one moment."

"I just had all kind of people showing up, coming to the hospital. I had letters coming in every day. Just a lot of motivation from everyone," Josey said.

Including his two-year-old son Henry Jr.

"He was probably my biggest motivation. You look at him. He's looking at you. You just can't be down around him. He's picking me up. I mean I had to rely on his spirit to pick me up and keep me going because I'm his example in life," Josey said.

After 17 months of rehab, Josey returned to the field in April for the first time.

"I always thought I felt 100% but I had to test things out. Once I got into Spring, that's when I really got the chance to see who I was as a football player. At that moment then, that's when I started feeling better. I was like okay I'm back to what I can do now," Josey said.

"He's already succeeded in my eyes no matter what he does on the field this year but I'm expecting big things," Missouri wide receiver L'Damian Washington said. "I'm expecting like an Adrian Peterson kind of year."

Then came this past Saturday's game against Murray State - 658 days after his injury.

"That first time he carries the football in a game, that's going to be a special moment for all of us," Sharp said.

His first run was a 12-yard gain on the 3rd play of the game.

"Just running back out there with my teammates. That was probably the happiest moment ever," Josey said.

Then, in the 4th quarter, Josey scored on a 68-yard touchdown run and was embraced by teammates.

"I looked up and thanked god. I was pretty much screaming. I hope he heard me," Josey said.

"For him to come back from that kind of injury and really be how he is now and that attitude and everything, it's really cool and it's really picked a lot of the team up," Missouri quarterback James Franklin said.