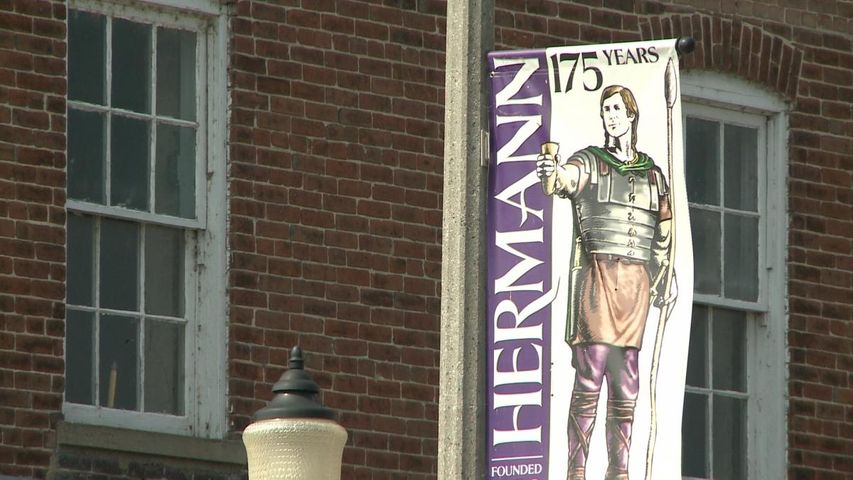 HERMANN - Artifacts and documents from this river town's earliest days were on display Saturday as Hermann marked its 175th anniversary.

Tourism and Economic Development Director Jim Grebing said this weekend's exhibitions and concerts are part of a yearlong celebration. Grebing said bands playing both modern and 19th-century German music would perform throughout the weekend. He said the town is very proud of its German heritage and he hopes residents and visitors come away with a greater appreciation for the town's history.

Grebing told KOMU 8 News German-Americans living in Philadelphia decided to move west because Philadelphia "wasn't German enough." Settlers chose the site and planned the town before arriving in December of 1837. Grebing said the town's location along the Missouri River reminded many settlers of the Rhine River valley in Germany.

At the Deutschheim State Historic Site, site administrator Cynthia Browne showed lifelong Hermann resident Velten Rohlfing 19th century lithographs of Hermann and Philadelphia. She said settlers could buy shares in the stock company that planned Hermann for $25 each. Browne said each share entitled the holder to a 60 by 120-foot lot in town or could be applied to a 40-acre lot outside of town. She said this allowed the town's founders to bring in a mix of industry and agriculture to create a self-sustaining town. Browne said descendants of the town's founders were invited to sign their names next to their ancestors in a register of the town's original settlers. Rohlfing's family was not among the settlers, but he enjoyed looking through the roster and finding family names of friends he knew.

Rohlfing, 87, said his family spoke German in their home, and as a result he did not know English when he enrolled in first grade. He said many of his friends had the same problem. Rohlfing said he became a bricklayer when he grew up and helped build several of the town's buildings.