Hickman beats Capital City to get first win of season 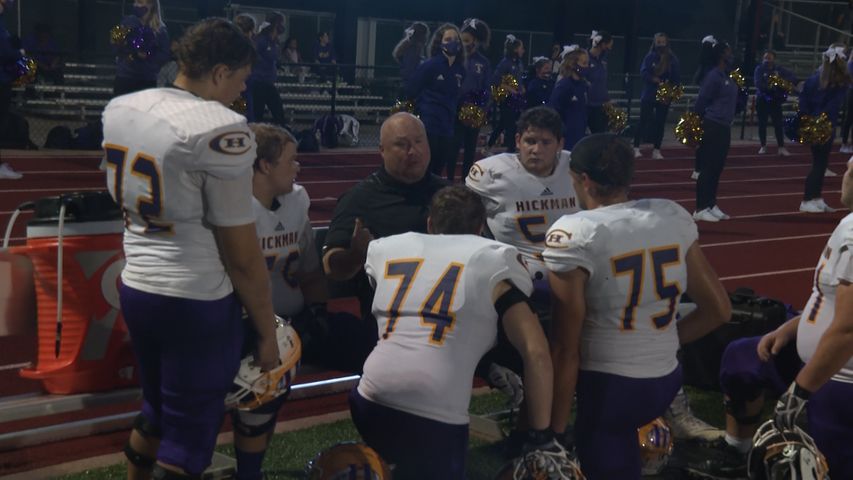 JEFFERSON CITY - It was a battle of ground games in Adkins Stadium as Hickman and Capital City went blow-for-blow to see whose legs and defense would outlast one another.

After a barrage of rushing touchdowns, the Kewpies came out on top with a final score of 52-27. Hickman fought for every yard in its first win of the season, bringing its record to 1-2.

The game got off to a not-so-promising start for Hickman when junior Keshawn Collins fumbled on the first play and created a Cavaliers touchdown.

However, once the Kewpies were able to shake off the first possession they focused on what their Wednesday practice had been all about – securing the ball at all costs. After ending  Friday's game with only one fumble, the squad had accomplished what it set out to do.

With this matchup, it was bound to be a bloodbath given that both teams were seeking their first win . The difference maker for Hickman came from its run game.

In the past two games for the Kewpies, it was a rotation between passes from Eric "TJ" Turner to either Devin Turner or La'Javion Williams. Tonight, the football gods were on the runners' side. Collins, Kieth Kelley, Kayshaun Prince and Deon Watson were at the forefront of the offensive success for their squad , moving the chains as much as possible every time they had the ball. Watson produced three of the Kewpies' touchdowns in a stellar night for the junior.

"We feel like we have a four-headed monster," Alvis said. "How can we get those guys going? How can we get them rolling and just build confidence? Tonight we were able to get them going on the run game."

The Kewpies weren't the only ones gifted on the ground tonight. All of the touchdowns scored by the Cavaliers were on rushing. The running back duo of Ethan Wood and Jacob Hurley Jr. put loads of pressure on the Hickman defense  until the third quarter. .

Despite this being a run-heavy offensive for Hickman , Turner got his squad on the board in the air for a touchdown to Williams. He also showed his own speed, running in a touchdown himself  in the fourth quarter — the final nail in the coffin for Capital City.

In this blow-for-blow matchup, the Kewpies came away with three things:  improved ball security, confidence in their run game and — most importantly — a win.

Hickman returns home next Friday for a 7 p.m. conference matchup against crosstown rival Battle . The last time the Kewpies met the Spartans, they lost 67-37.