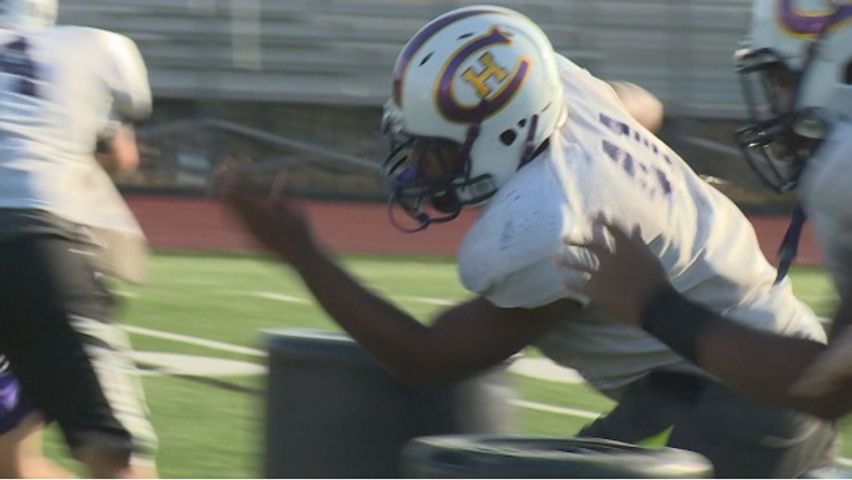 COLUMBIA - Arnel Monroe looks at his football team, and the coach recognizes the Kewpies have a different look than most years. The Hickman football team has 72 players. 14 of them own a driver's license.

"We're a young football team and we're building for the future," Monroe said. "We know that and we make no excuses with that. We are what we are and we have what we have."

Monroe could blame the Kewpies' 0-4 record on the youth and inexperience of the team, but he doesn't. Instead, he looks to the future, envisioning what his team will look like assuming the core he's built tays on the team. Specifically, Bohannon Thompson.

Thompson, 15, is a sophomore defensive tackle and fullback. Thompson is built like an ox, focusing intently on tackling drills while carrying a laid-back personality with his friends on the football field. He may be one of the first players in Hickman history to play all four seasons on the varsity squad. The young was a reserve on the team last year and has started games this season. Thompson said he wants to cement his presence on the defensive line through his senior year.

"I'm naturally a defensive player," Thompson said. "I'm more like a 'go out, attack, go get the running back or quarterback, go get the ball' type of player."

Monroe said he expects Thompson to play in Friday's game against Providence, saying Thompson has done an "admirable job" in game action.

"Bohannon is a strong, young player," Monroe said. "He's got a quick first step. He's what we're the building defense on in the future. He's a sophomore but he plays older. He's got a will to win."

Thompson smiled when asked how it felt to have a vote of confidence from his coach.

"It feels good to know I'm of importance to the team and a lot of the young people on this team are important, instead of just being more about the older guys and the seniors," Thompson said. "[The coaches] make it important to make sure that everyone's important."

Thompson said there will be a learning curve and a few bumps in the road for his team. However, he said the team's spirits have not diminished due early season struggles.

"Our morale's been pretty good overall so far," Thompson said. "You know, everybody has their little mss ups, the one time they might miss a tackle, or something like that. But other than that, people just fix their mistakes, fix it and do what they're supposed to do.

"A lot of young people on this team are a lot more skilled than you would think they are, with the age difference and experience and everything else. And a lot of them pick it up really quick, they can play with the other guys and get along really well."

Thompson said school is a priority, and he focuses on studying when he's not on the gridiron. He also said he concentrates on staying in shape and challenging himself every day. Thompson said he recognizes he'll have to take on a leadership role with the team one day.

"That's just playing football," Thompson said. "Trying to get the team to be more positive, and everything else, and try to get the defense to make their tackles. Make sure to stay on top of everything, keep a good game tempo."

It may be this year, or a year or two down the line, but Bohannon Thompson will be ready for the future.

Hickman will host the crosstown rival Rock Bridge Bruins in the Providence Bowl. Hickman owns the series with a 10-9 record. Rock Bridge has won the last two games.

When Monroe was growing up, Hickman vs. Jefferson City was the big rivalry. Nonetheless, he said he's excited to see what Rock Bridge will bring to the field Friday. Monroe called Rock Bridge an "explosive team."

"We're going to have to get a hold of Mr. [Nick] Collins, because a really good back. And Mr. [Karson] Ringdahl has stepped up [at quarterback] admirably for Mr. [Logan] Twehous, so we'll have to get those things done. We'll have to execute on offense better than we have the previous four weeks, and make some things happen."

"My focus is on eliminating some of the catastrophic mistakes that have held us back the first few weeks," Ofodile said. "So we can set ourselves up for success. We've got to maintain focus and stick to the basic fundamentals, and prepare ourselves for Districts."

Ofodile said his players' morale has impressed him as the team reaches the middle of the season.

"We don't measure success by the number of points on the scoreboard or our number of wins," Ofodile said. "We've been through plenty of adversity against some tough teams. There's a lot of 3-1 teams out there right now that wouldn't want to see us on a Friday night. All that matters from here on out is Districts."

Thompson studied Rock Bridge during the preseason jamboree, and he said the Bruins showed a lot of grit.

"They put up a good fight and tried their hardest," Thompson said. "I'm looking forward to teams that go give us a chance and give us their all instead of just, oh, expecting us to not do anything."

Monroe said he didn't have a special message for his players relating to the Providence Bowl.

"It's semantics," Monroe said. "You want to go out and try to win every game. I know Coach Ofodile is saying that to his kids at 1-3. We're working really hard to get our first win, but we're working hard to get better."

Hickman vs. Rock Bridge is KOMU 8 Sports' Game of the Week for Friday Night Fever. Watch highlights of 14 games on KOMU 8 News at 10, and follow the live blog for constant updates for Week 5.