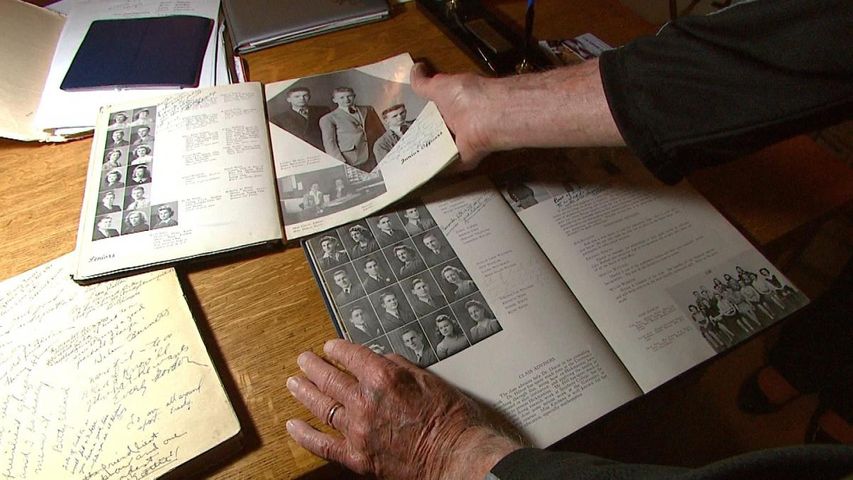 COLUMBIA - If you take a look around 87-year-old Joe Forsee's basement, it's easy to find his roots. He pulled multiple Hickman High School "Crest" yearbooks off his bookshelf stamped with the years 1941 through 1943. As he flipped through the aged pages, he pointed out a younger Forsee.

His story starts in 1925, born and raised in Columbia on Hinkson Avenue. He attended Benton Elementary and Jefferson Junior High. He graduated from the town's oldest high school, as Hickman's "most popular boy," in 1943.

"That's what the vote says, but I don't know," he said while laughing.

Forsee added, "Those were unusual times. All the boys knew where we were going."

Unfortunately, at the time Forsee and his classmates were in school, war was popular too.

"In our class we lost three," he said.

The class lost three to World War II. It seems just about everyone at that time found themselves fighting for freedom. Forsee too, he served in the army.

After the war, the years kept coming and the class kept close. They reunited about every five years since walking the stage. This class is already etched in history by battle, but now they're making history for reasons other than the war as seventy years later, the class of 1943 is meeting again.

"Seeing friends and comparing our joints and problems, how many steel hips we got," Forsee said smiling.

Around 20 of the more than 200 classmates who graduated from Hickman High in '43 gathered in Columbia for their 70th class reunion this June. The group unpacked the past and shared some spirits. The classmates recalled playing sports together and singing in the choir.

"It's always great to see it, to see those that are still left and those that are able to travel to come back. You've got lots of great memories of high school," one of the graduates said.

Some remembered the light-hearted moments, others reminisced on the life-changing events.

"When war was declared I'll never forget it," said Hickman High graduate Anna Dean Ballew Teague. "We filed into the auditorium, there wasn't a sound...and the minute Congress declared war every senior boy filed out down the stairs and went to join and we were all sobbing."

Even though these former classmates endured one of our nation's toughest times, they're not hardened by the past.  Instead, they embrace it, as they embrace each other.

"We were a very close group, had to be, we didn't have anything else to do then," Teague said with a laugh.

This crew of Kewpies is certainly proud of its origins. You'll find them clad in purple and gold, and friendship seventy years strong.

The group said this is most likely its last reunion. They said those living in the area still meet on a monthly basis though at the local senior center.