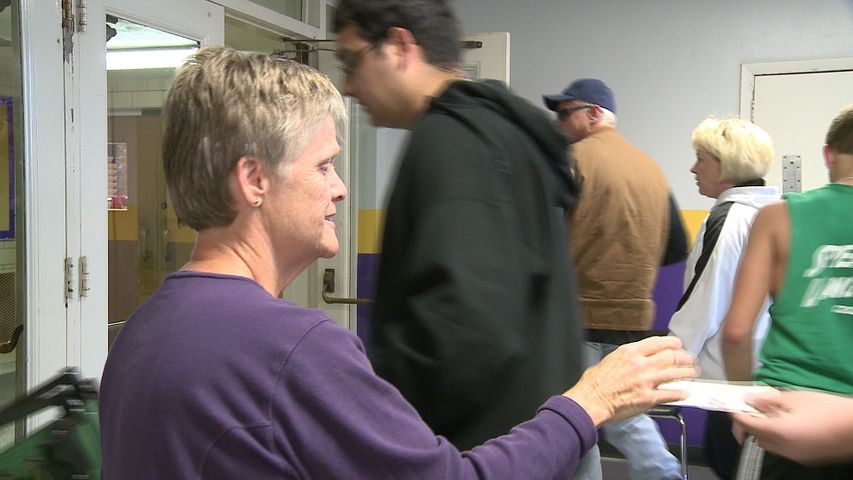 COLUMBIA - As the line to enter Hickman High School wound further and further into the depths of the school's parking lot on Friday afternoon, athletic director Doug Mirts grabbed his loudspeaker and went to work.

"If you need to purchase tickets, the line will be over here!" Mirts screamed. "It's the line on the right!"

The masses listened to Mirts for a while, but when the clock struck exactly 5 p.m. - the scheduled time for doors to open for the Hickman vs. Rock Bridge playoff football showdown - Mirts put his loudspeaker away and watched as hundreds of Hickman students created a purple mob. They hollered as they rushed toward the door, forcing a logjam for staff at the ticket windows. In all, Mirts said 3,100 people had purchased tickets in advance for this football game, the first playoff meeting between the cross-town rivals since 1981.

Within an hour of the ticket window opening, Hickman staff continued to make sales. They said they would not know until after the game how many tickets they sold, however, and Mirts said they would simply sell tickets until they ran out.

That means one thing: "standing room only," a rare occurrence for high school football.

"I can only think of one other time [that's happened], and that'd have been in 1994," Mirts said, referring to a triple-overtime Hickman victory.

Normally, the Providence Bowl during the regular season draws anywhere from 12,000 to 18,000 fans at Faurot Field, more than double the amount of Hickman's capacity. Predictably, the scarce resources soared demand for this ticket. Need proof? Hickman junior Madison Kent used her savvy business skills to purchase 10 tickets - the maximum amount - and then sold five above face value.

She made 50 bucks- and still had five tickets remaining for herself and her family.

"I'll probably buy some shoes or something," Kent said. "Nothing important."

The overflowing fans also caused a nightmare scenario for parking. As cars filled up the surrounding streets, Columbia First Assembly offered spaces across the street. Logan Miller, the youth pastor at the church, pawned for donations with a makeshift milk carton, but he did not charge a fee for parking.

"I just throw up a tent, set out a few lawn chairs, put up a little donation bucket," Miller said. "I hope we make some money."

Miller said he had more than 200 spots available at the church and would use the donations to help pay for a youth retreat to Chattanooga. He won't have to worry about finding spots for Rock Bridge students, however. Mirts said that school will bus students over and then take them back to Rock Bridge at the conclusion of the game.

"Their traffic problems will be a whole lot less than ours," Mirts said.