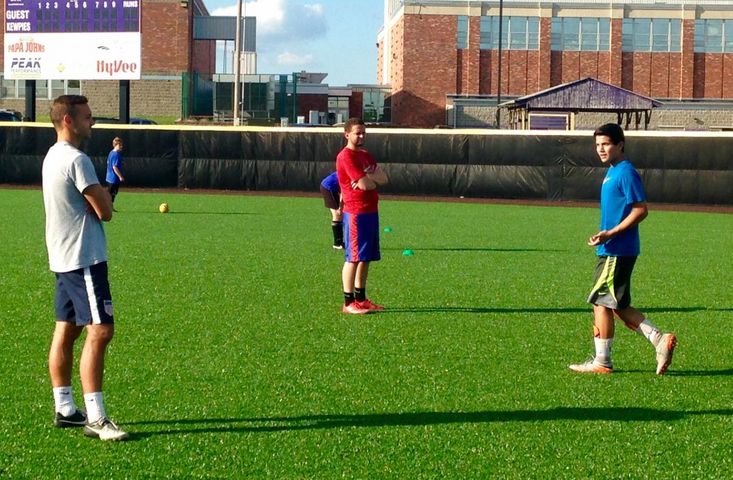 COLUMBIA - As she flipped through old photo albums of her son throughout his soccer career, Trish Savage thought about how the sport shaped him into the young man he is today.

Savage sat in the stands at Hickman for the season's Purple and Gold game for the first time in a few years to watch her son; only this time he wasn't on the field playing, he was coaching.

Whitehill has been playing soccer since the age of five. He played for Hickman all four years of high school until he graduated in May 2013. He was varsity captain his senior year and was awarded the Andrew Scoop Olsen Scholarship, awarded to a senior with courage to start a new tradition.

Whitehill is living up to the award as he starts a new tradition for himself, coaching his alma mater's C-team. He said it's taking some time to get used to being back on the field.

"It is a little weird," Whitehill said. "The first day of practice I thought, 'Wow, am I back in high school?' But now I've gotten used to it, it's a lot of fun, I enjoy it."

Whitehill said he heard about the opening from word of mouth and was interested in coaching for the first time.

He said coaching has taught him a lot about the game he didn't recognize as a player.

"I think as a player you see the field differently as a coach," Whitehill said. "I think they work hand in hand in a good way. I learned that I have to have a lot of patience as a coach."

As much as Whitehill loves coaching his players, they love learning from him because he was in their shoes only a few years ago.

"He just knows how we would think of things on the field," Ben Pace, C-team player, said. "He's fun, but he's always the one that wants you to do your best and strive to be better and play harder."

Whitehill plays for the Men's Club Soccer team at Mizzou and says he has developed more as a player from his experiences as a coach.

As a player, Whitehill said his favorite part about the game is scoring goals. But, as a coach he enjoys teaching a player and watching them change their play during a game.

Whitehill uses drills he remembers running as a player to help him run practices. He said it's fun to be back on the Hickman field again and see the players making memories similar to the ones he will always remember.

"My favorite memories are all of the bus rides and the shenanigans and acting silly with my teammates," Whitehill said.

His mom said she feels the same way.

"I'm just really happy to see my child happy and doing something that he loves," Savage said.

Savage said Whitehill's personality is what players want in a coach.

"He's always been so positive and just enthusiastic," Savage said. "Just seeing how soccer's been a constant in his life, it's nice that it's kind of come to fruition."

The last time Savage watched her son stand on a field against Rock Bridge was the night her favorite picture of her son was taken.

The next time she sees her son coach, it will be on Sept. 26 when his team takes on the Rock Bridge Bruins.