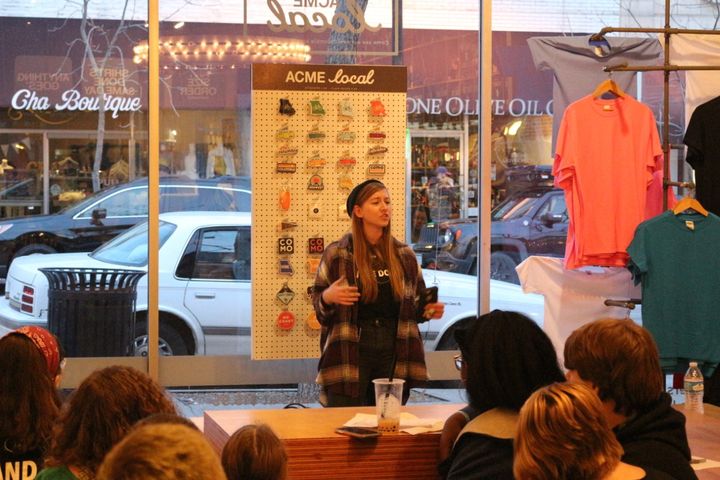 COLUMBIA - A team of Hickman High School students is preparing to compete at the world's largest youth poetry slam competition.

The five-day competition will include individual and group presentations from more than 500 students from 100 teams. The students will be judged on writing and performance quality for a chance to move to elimination rounds.

The Hickman students are part of the mid-Missouri chapter of Louder than a Bomb (LTAB), a national organization. It was first founded after the 9/11 terrorist attacks to give students an outlet to express their emotions, according to T'Keyah Thomas, the chapter's creative director.

"We really wanted to hold space for local artists to not just be in their heads, in their rooms, because an important step of using writing as therapy really does from getting up on stage and allowing your community to also see you and receive that," Thomas said.

The 2018-19 school year was the second season local students had an opportunity to compete in the local competition.

Hickman's team won the mid-Missouri tournament the past two years, but team members say it's not about winning, it's about discovering their voice.

"Being young, it sometimes feels like you don't have a voice," Hickman senior Amy Lemuz-Guerra said. "So having that option to get up on the stage and share what I have to say, whether it be political or just something about everyday life, I really enjoy the opportunity."

Inspiration for the pieces come from personal experiences, world events, and discussions in the classroom. Lemuz-Guerra says she uses the stage to share about her experience as a first-generation American and the daughter of Honduran immigrants.

Flow, Rhythm, and Beats, a benefit concert, will be hosted at Logboat Brewing Co. from 2-6 p.m. on Sunday to support and raise funds to send the team to Las Vegas. Thomas said the team still needs about $3,000 to go.

The outdoor event will include musical performances by Violet and the Undercurrents and Loose Loose. Aerial Arts and Hickman's slam poetry team will also perform. Admission is $5.

No matter how the team fares at the international exhibition, Nancy White, a creative writing teacher at Hickman and the team's coach, said she's proud of all of the students.

"They reach in and find something that's so much greater than themselves and in doing so they create art that is for me inspirational," White said. "It certainly gives me most assuredly hope for our future."