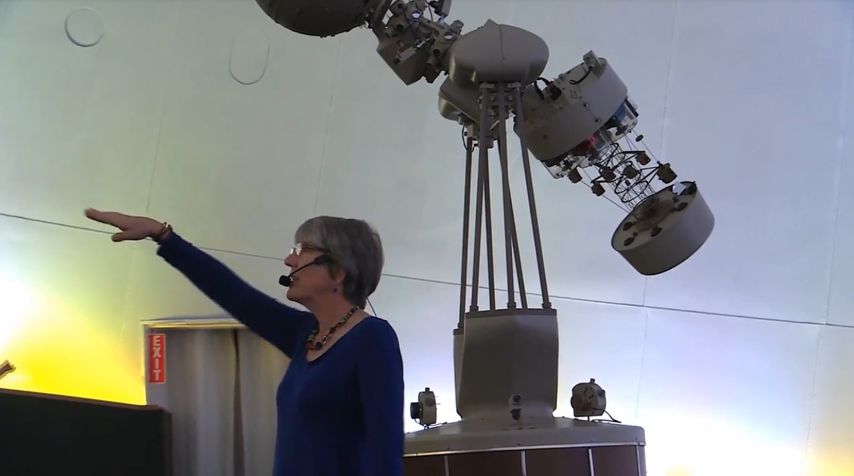 COLUMBIA – Mid-Missourians experienced an outer-space journey on Saturday at the Rock Bridge High School through the school’s STEM Expo.

Five different show times were held at the school's planetarium, and each featured a full-dome show called “Two Worlds Beyond – Journey through the Solar System.” An exhibit hall with multiple science organizations and booths were set up for viewing as well.

The planetarium held 95 people each show and tickets sold out by Thursday. The STEM Expo is one of only two planetarium shows available to the public this school year.

“It’s to get people excited about astronomy,” planetarium director Melanie Knocke said. “And as a result, get excited about science.”

There used to be planetarium shows every second Saturday of the month, but Knocke is transitioning into retirement and cutting back hours. The new director will be a full-time position and Knocke hopes they will increase the number of shows for the public again.

“We are hopefully going to be establishing much more outreach for the general public because I know there are a lot of interested general public people as well,” Knocke said. “But primarily right now, it’s for the school district.”

The planetarium is owned by Columbia Public Schools, and it hosts multiple field trips from children across mid-Missouri. There are a variety of shows available and each is tailored to kindergarten through fifth-grade students.

Younger children experience classic shows, which are in a slide show format. Older children, however, get a full video immersion. Each video simulations costs anywhere from $3,000 to $15,000.

The Columbia Public Schools Planetarium was built in 1974, following the end of the Space Age. An estimated 200,000 children have visited the CPS planetarium since its creation, which is nearly double Columbia’s population.

The next expo will be held in March, and it's called Dinos & Cavemen Science.