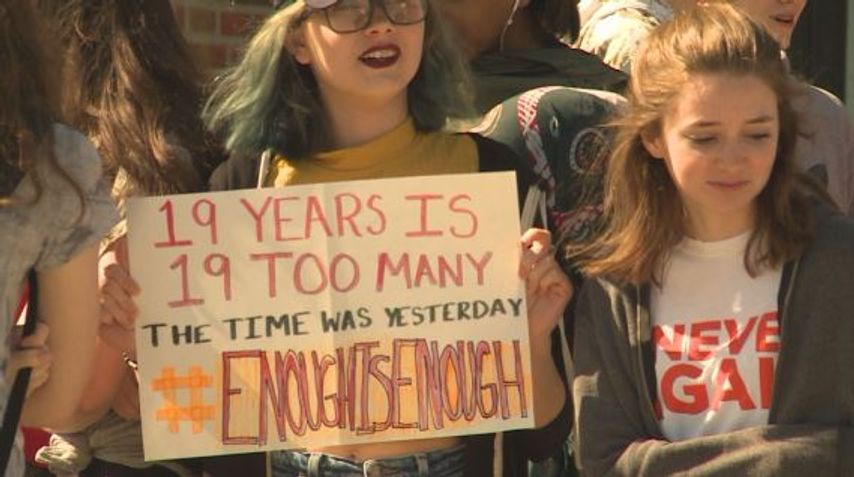 COLUMBIA - It’s been a little more than two months since the Stoneman Douglas school shooting in Parkland, Fla., and high schoolers in Columbia are making sure Americans don’t forget about it.

“You know that happens in a lot of movements, it’s something where people gradually lose interest, gradually forget about it,” said walkout organizer and Hickman senior Catherine Saidi.

Students at Rock Bridge and Hickman high schools joined students across the US as part of Friday’s National School Walkout.

April 20th also marks the anniversary of the Columbine High School shooting, where more than a dozen people were killed.

Students who participated in Columbia accepted potential consequences like unexcused absences or tardies to demonstrate. Teachers were not allowed to participate, but Saidi said some were wearing #NeverAgain t-shirts in class to show their support.

The walkout started quietly at 10 a.m with just a few students gathering at first, but soon grew to a few dozen. Saidi said the turnout was less than half the size of the school’s first demonstration on March 14.

“We had very different numbers,” Saidi said. She said the attitude shift and decline in participation is representative of what’s happening in government.

“Lawmakers are relying on us to forget about this to get bored, to get tired, to move on to the next thing, and i think if we want to see actual change that’s something we can’t do,” Saidi said.

The walkout began with a moment of silence for the victims of school gun violence at Columbine, but didn’t take long for things to get loud.

“America, we are tired. Your children are tired of dying while you stand by indifferent,” Hickman senior Lexi Davis said as she shouted into a bullhorn, leading the crowd.

The group passed out voter registration information and pledged to show their strength at the polls.

“If those elected will not take charge and support gun sense - gun sense legislation - we will vote them out of office this November,” Davis said.

“I’m hoping for higher involvement among younger voters,” said walkout participant Katie Kim. “I’m hoping our generation will change that and be more vocal. I hope that we can create actual change in our legislation.”