Hiking for a cure 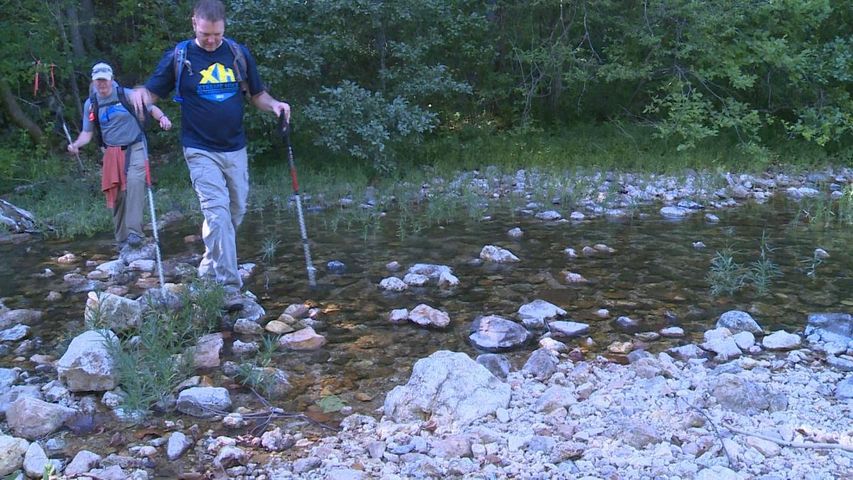 LESTERVILLE - Cystic fibrosis is a disease 30,000 Americans are dealing with right now.

The Xtreme Hike program, which is a part of the Cystic Fibrosis Foundation, is fighting for a cure.

The Gateway Chapter of the program sent hikers 30.1 miles through the Ozark Trail in Lesterville, Mo. The participants started around 4:00 a.m. and hiked well into the afternoon and night.

Colleen Caul is in charge of all active events for the foundation, such as the Xtreme Hike. She said her favorite part of the event is meeting and congratulating the hikers as they reach the end.

"When they cross that finish line after ten to 15 hours of being out on the trail, they're a different person," Caul said. "I think they get just as much out of it as the CF foundation gets."

Each participant is required to raise $2,500 for the foundation and most exceeded this amount. Joe Pepin walked and finished his first hike for Extreme Hike.

""Almost every weekend, we had a training hike and we started out with three miles and worked our way up to 16 miles," Pepin said. "That is the most I'd hiked before this."

Pepin has a 15-year-old daugter who was diagnosed with cystc fibrosis when she was one.

"I wanted to challenge myself to do something significant to prove to her and to others with CF that you can push yourself and really make an extra effort to help raise awareness and raise money for CF," Pepin said.

Cystic Fibrosis causes mucous in the body to become thick and sticky, building up in many of the organs—especially the lungs and pancreas.

"It's all about staying ahead of the next virus, the next cold and keeping her as healthy as possible so that she doesn't get sick and have to go into the hospital," Pepin said.

Cystic Fibrosis, though, is still a deadly disease, and Xtreme Hike chairperson Suzie Hunt knows this all too well.

"My husband had cystic fibrosis," Hunt said. "He passed away at the age of 44 and that's been almost five years ago."

Hunt participated in the inaugural Xtreme Hike five years ago in North Carolina, soon after the time of her husband's death. At that point, Xtreme Hike approached her, inquiring if she would help expand the program. She gladly accepted.

"What the Xtreme Hike stands for is simply amazing," Hunt said. "I'm happy to have been approached and help out how I can."

Hunt's husband, Jim, loved the outdoors and had planned to hike a mountain with their son, Logan, right before his health started to get worse.

"One of the things my son, Logan, said when he was saying goodbye to his dad was, 'I love you dad. I'm going to miss you so much and I guess we're not going to be able to hike that mountain together,' Hunt said. "When I learned of this event, it resonated with me, because I thought 'I can hike that mountain that they didn't get to hike.'"

Five years later, Hunt has helped bring Xtreme Hike to St. Louis, Mid-Missouri and even across the nation.

However, she's not close to being done.

"When my husband took his last breath, he inhaled and then just exhaled this really nice deep breath," Hunt said. "As he exhaled, I inhaled, vowing to never give up and to beat CF for him."

To learn more about the Cystic Fibrosis Foundation, visit www.cff.org.