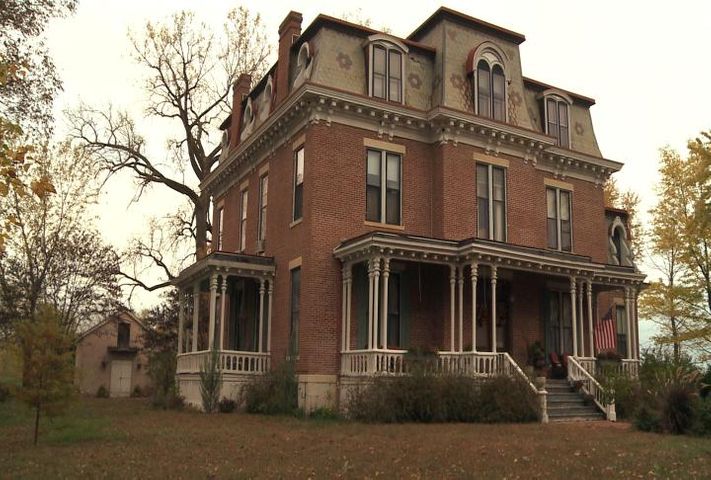 The plantation is rumored to be haunted and was converted into a year-round bed and breakfast by horror writer Don Upp and Joe Ely in 2004. Upp has published two horror novels based on the plantation's history, featuring the home as " Ridge Cliff Manor". He said he first fell in love with the home while visiting his grandparents' house as a child.

"They lived right next door, and I would imagine what it would be like to live there. That's where my novels began," Upp said. "The stories started with this house."

Rivercene previously sat on the banks of the Missouri River before the river was dammed and stopped flowing there. In the 1800's the mansion was a meeting place on the river and hosted many parties and events. Docks were built out front, and the steamboats could dock right at the main gates, leading some to believe the house was a hotel.

Upp and Ely decided to restore the property to preserve it history by keeping most of the home's original design. There are 10 original bedrooms in the home and 12 bathrooms. The 12,000 square foot mansion retains a large portion of its original owners belongings such as journals, furniture, and portraits of the home in its 18th century glory.

According to Upp, several people have died in the home, and he said he strongly believes the home is haunted.

"I want to give people an experience they can't easily forget. I want guests to feel like they are a part of the history of the home," Upp said. "I want the the feelings and experiences to be authentic."

Currently, Upp and Ely hosts basic tours of the home, but the mansion will officially take on the persona of Ridge Cliff Manor in early November with a two-night preview of the murder mystery mansion. The two-night preview was announced via web and social media Oct 25.

Guests will be able to hear about one of the mansion's most notorious residents by candle and firelight, and afterwards explore the mansion in the dark with a special guided tour. Upp says these special paranormal themed events were suppose to debut last year, but due to his recent health concerns, they were pushed back.

The Rivercene Mansion operates as a bed and breakfast on Monday, Oct. 27, 2014, in New Franklin, Missouri. The mansion was completed in 1869 and housed the Kinney Family; Joseph Kinney was a prominent steamboat captain during the Civil War and general tours can be arranged. (KOMU/Kristin Rohlwing)

A single flower grows from the middle of the Rivercene Mansion's backyard on Monday, Oct. 27, 2014, in New Franklin Missouri. The alleged haunted mansion will be renamed "Ridgecliffe Manor" next year and incorporate murder mystery elements. (KOMU/Kristin Rohlwing)